Google, Apple, Microsoft, Amazon, Facebook, and other tech giants are all building their own “bots” that utilize artificial intelligence and machine learning. There are a bevy of other startups doing the same, developing conversational technology that can help humans with everyday tasks. 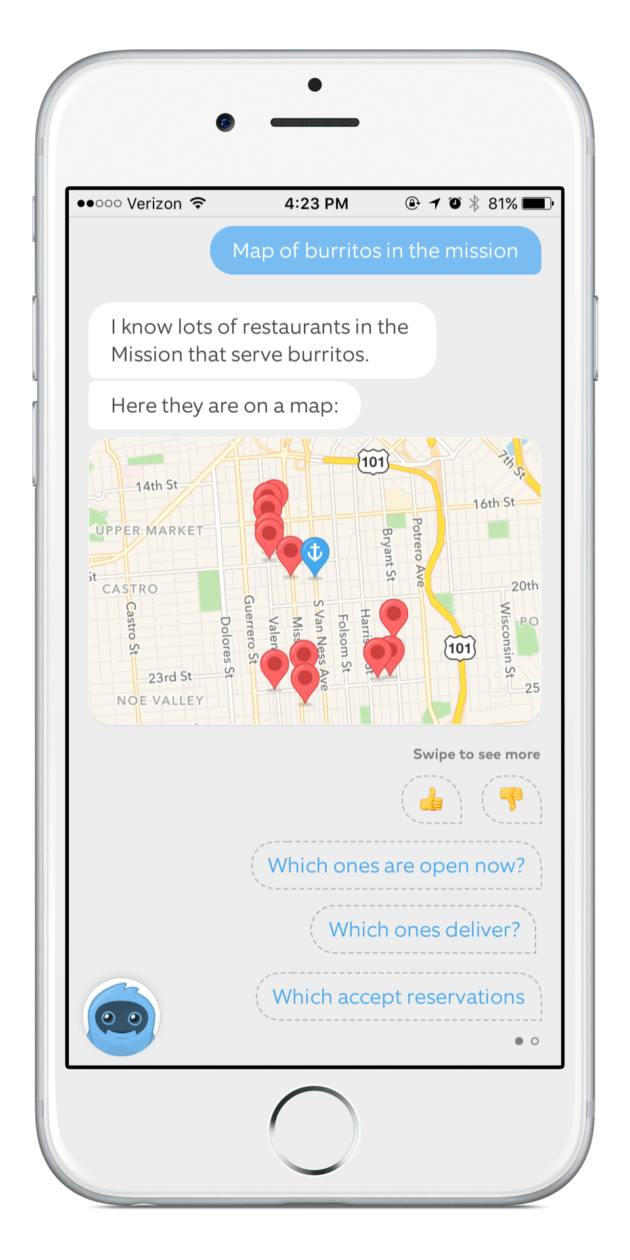 But one small company out of Palo Alto, Calif. is building a virtual assistant that it believes is differentiated and special — and some top investors seem to agree.

Ozlo is a new Silicon Valley startup that last month reeled in $14 million investment round from Greylock and AME Cloud Ventures, a fund started by Yahoo co-founder Jerry Yang. It also just opened its first remote office in Seattle and plans to move into a permanent location next month, with room for up to 25 employees. The 26-person company already has four employees working out of Seattle.

Ozlo is designed to quickly answer questions or perform tasks that may arise throughout the day. For now, it is designed to help you find places to eat or drink, but the vision certainly goes beyond that.

Here’s a bit more on the thinking behind Ozlo from Jolley, who penned this Medium post last month:

We call Ozlo a personal artificial intelligence because he’s an AI system that works for you. You can ask him questions, tell him when he’s right or wrong, and even teach him about your preferences. As you interact with Ozlo, he becomes more sophisticated in his reasoning about you, the world, and his ability to help you.

Behind the scenes, Ozlo constantly reads through information provided by partner apps and websites to learn useful facts about the world. He can reference all of this information directly when trying to answer your questions, which leads to faster and more accurate answers.

Ozlo is easy to use. Text your question to Ozlo and have a conversation with him. He’ll provide answers in neatly presented cards with deep links to the apps and websites that provided the information.

Today, Ozlo knows about places to eat and drink — things we all do daily. Ozlo will soon be learning lots of other things about the world, like what to do once you’re fed.

John Lilly, a partner at Greylock and former CEO at Mozilla, noted in a blog post last month that detailed how he hasn’t “really found anything else quite like Ozlo.”

“Ozlo provides something new: a quick & easy way to have a conversation about the world around you, supported by an extremely deep technology stack,” Lilly wrote. “It’s hard to overstate how difficult it is to make something so challenging feel so simple, and it’s great to finally be able to share it with the world.”

Ozlo Principal Engineering Lead Heidi Young told GeekWire that the Ozlo team, made up of folks from Facebook, Microsoft, Amazon, and others, is focused on “trying to build the ‘thing’ that you can’t help but want to interact with.”

“We are creating our own knowledge graph to create a very precise and complete model of the world,” Young explained. “We then expose that graph through a natural query interface that runs inside native apps, messengers, and the web. We believe that the future of search won’t be keywords on a mobile device, and Ozlo is our first step into that new world.”

Young told GeekWire that the talent in Seattle is “phenomenal, especially for this type of product. She noted the cloud infrastructure work being done at larger companies like Microsoft (Azure) and Amazon (AWS), as well as research at places like the University of Washington and the Allen Institute for Artificial Intelligence.

“These two together naturally attract our ideal type of candidate,” she said. “I, personally, would like to see Seattle become known as the place to build AI for consumers.”

I, personally, would like to see Seattle become known as the place to build AI for consumers.

S. “Soma” Somasegar, a Microsoft veteran who joined Madrona six months ago as a venture partner, told GeekWire at the event that there is a “mass concentration of innovation” from big and small companies in Seattle focused on both cloud computing and newer industries like machine learning and AI.

“Given the pedigree of companies like Microsoft and Amazon, and the ecosystem that has spun up over last five to 10 years, there is a tremendous amount of talent we have here that focuses on solving hard technology problems,” he said.

Young said that Ozlo plans to make hires primarily for product and engineering at the Seattle office.

“We’re especially interested in folks that are excited about building a personal assistant that is completely AI,” she said. “I’m confident that the Seattle office will be a strong pillar in our journey to making that a reality for consumers. The sky’s the limit in terms of where we can take Ozlo. We’re excited to establish our presence in the Puget Sound and work with all the great talent that can and will help us get there.”