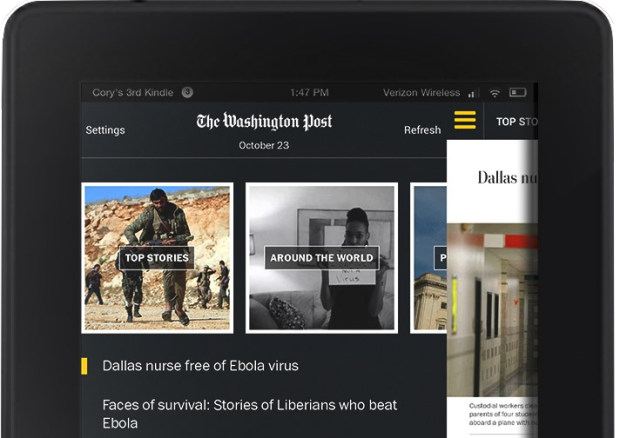 Six months ago, The Washington Post launched a Kindle app that was heavily influenced by Jeff Bezos, the CEO of Amazon and the newspaper’s high-tech new owner.

The app got a huge boost in users when Amazon agreed to include it in a free over-the-air software update to all Fire tablets.

Now, the newspaper is hoping to slowly transition those unpaid users to long-term subscribers. To do so, it’s currently offering readers a six-month subscription for $1. When that runs out, the subscription will renew at a cost of $3.99 a month.

The initial free trial period, which converts to a paid subscription, is a fairly textbook approach that Amazon takes, namely with Amazon Prime, which sees a high conversion rate after a free 30-day trial. The similarities between the app and Amazon’s approach is not a coincidence.

When the newspaper’s Kindle app first launched, GeekWire reported that the app was developed by the Washington Post, but heavily influenced by Bezos who “makes himself available any time he is requested.”

The new app for Amazon’s Kindle Fire promised an immersive reading experience, vivid photography and a focus on national and international audiences. It also promised to publish two complete daily editions, plus updates throughout the day.

While the app gets 4.2 stars out of five on the Amazon Appstore, the user experience seems to be tainted by the method in which it was first delivered to customers. A vast majority of comments are about the sudden appearance of the app and how it was downloaded without the Kindle owner’s permission.