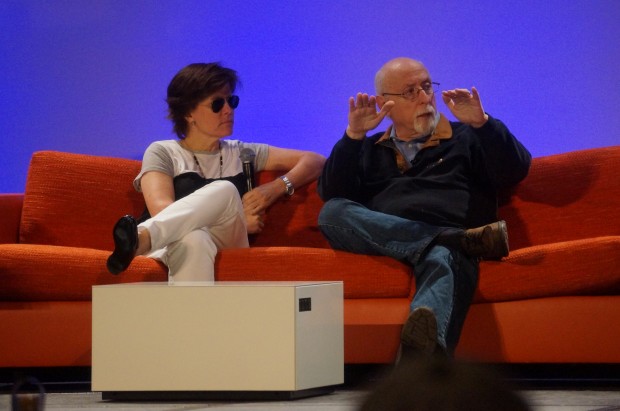 Vox Media, owner of The Verge, SB Nation and Vox among others, is acquiring startup tech media site Re/code in a stock deal of undisclosed size.

The announcement was made just as Re/code kicks off its annual Code Conference in Rancho Palos Verdes, California, a star-studded event with tech luminaries such as Twitter CEO Dick Costolo and Snapchat CEO Evan Spiegel on the speaker docket.

Journalists Kara Swisher and Walt Mossberg, the Re/code co-founders, will stay with the company. And the Re/code events business will continue under Vox. Swisher, Mossberg and their former AllThingsD team left the Wall Street Journal to create Re/code in early 2014. Mossberg and Swisher are well-connected in the tech world, with a focus on breaking business stories, while Vox Media has a huge audience that Re/code lacks.

“Every single day, I’m doing about six different things, and one of them is journalism,” Swisher said at last year’s GeekWire Summit. With the move to a role in a bigger company, Swisher could be in a position to get back to more journalism.

According to a post on The Verge, Re/code will continue to focus on the business side of technology while The Verge sticks with more mainstream tech stories. Re/code’s product review team will move to The Verge and Mossberg will write reviews for both sites. The Verge had nearly 12 million unique visitors in April, according to comScore. Re/code, which according to The New York Times employs 44 people, attracted about 1.5 million monthly visitors.

In an interview with the Times, Swisher admitted that Re/code struggled to compete with larger rivals, saying that “being a smaller fish is really hard.”

“Re/code will benefit from joining Vox Media by integrating Vox Media’s various capabilities — including marketing, communications, audience development, sales and production,” Swisher and Mossberg wrote in a blog post today. “We will also eventually migrate to Vox Media’s beautiful, powerful and flexible proprietary publishing platform, which will give us new ways to present our stories to you.”

This news comes on the heels of an announcement from Austin-based Knowingly Corp. that it has purchased rights to Gigaom and will relaunch the tech news site this August. Buzzfeed is also going on a hiring spree, bringing in more West Coast writers to break more tech stories.