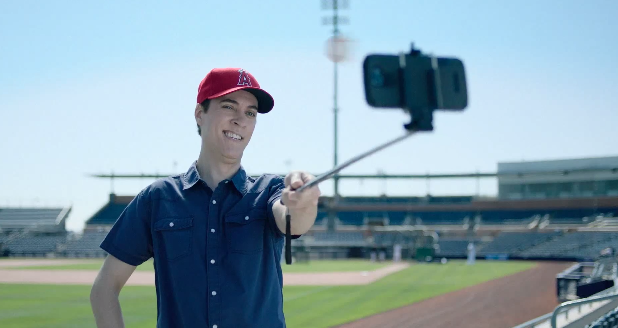 It’s nearly April and that means one thing — a new set of Mariners commercials are here.

In what’s become an annual tradition, Seattle’s professional baseball club is out with four new commercials for the 2015 season.

Two of them include some form of selfies. “Bat Control,” my personal favorite, features players and coaches instructing Robinson Cano to hit baseballs in precise locations: center field, line drives down the chalk line, at the Peanut Man’s trey.

Then, infield coach Chris Woodward says, “The guy taking a selfie.” Cano proceeds to smack a liner toward a selfie stick being used by an Angels fan. I’d bet there are many others — perhaps employees at the Smithsonian — that would love to have Cano on hand to prevent people from using selfie sticks.

The other selfie-related commercial features ace pitcher Felix Hernandez, who is apparently too intense to take selfies with his teammates.

Here are the other two — “Hawt Corner,” which stars third baseman Kyle Seager with a heavy metal rock band, and “Where Does It Go,” a spot inspired by Fernando Rodney’s arrow-shooting tradition. The commercials were created by Seattle-based ad agency Copacino+Fujikado.