A new Seattle-based startup spun out of the University of Washington wants to improve the efficiency of subsea operations.

Headed up by veteran entrepreneur Don Pickering, Bluhaptics recently raised $240,000 of a larger round from angel investors to continue building its hi-tech subsea robots.

“Subsea robots, or remotely operated vehicles, are currently operated inefficiently using outdated controls and analog inputs,” Pickering explained. “Pilots are overwhelmed by a data overload with up to 10 monitors streaming information from sensors on the vehicle.”

Pickering said that Bluhaptics’ technology can improve operating efficiency by 20 to 30 percent over existing options, “which can save offshore oil and gas and renewable companies billions of dollars per year,” he noted.

“We’re the first company in the world to use 3D data for manipulator controls (robotic arms) subsea,” added Pickering, who previously founded Altrec.com, Cosmix and Memetic Systems. “The history of subsea robotics is mechanical. Our GPU, parallel processing and control systems capabilities are unique in subsea robotics.” 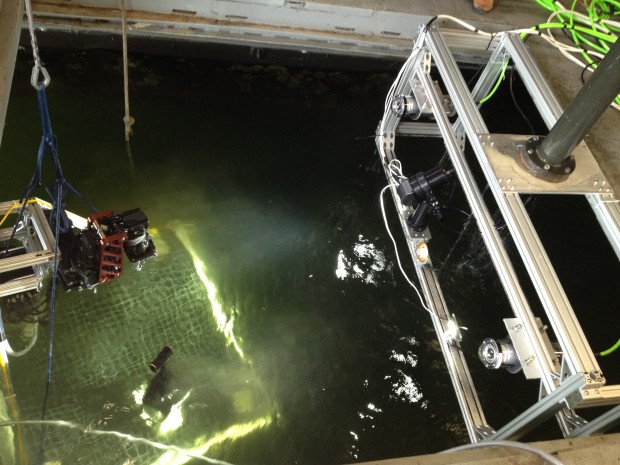 The company, which originally developed its technology at the UW’s Applied Physics Laboratory and Electrical Engineering department, initially built devices for surgical robotics. Pickering explained how the company pivoted after seeing consumer demand from the U.S. government.

“It transitioned to subsea applications in response to needs by the U.S. Department of Defense, Department of Energy, and EPA for technology to safely remove spent bombs and ordnance from the seafloor and lake bottoms,” he said.

Pickering is familiar with ocean-related businesses, having been CEO of ClipCard (formerly OneOcean), which originally began as a cloud-based service for the massive files associated with marine geospatial data. That company has since shifted to a more broad, consumer-based product that lets users access cloud files regardless of the type of app or service used.

Bluhaptics, which has eight customers and expects its first revenue this August, employs four but will double its workforce within four months. The team is comprised of experienced robotics engineers and researchers with experience in the medical, science, subsea, and defense domains. UW engineering professor Howard Chizeck is the company’s chairman, while UW professors Fredrik Ryden (VP of Engineering) and Andy Stewart (Ocean Engineer) round out the squad.

“We all share an intense passion for industrial telerobotics and believe that clean, safe, and efficient technologies are key to responsibly harnessing the ocean’s vast resources,” Pickering noted.