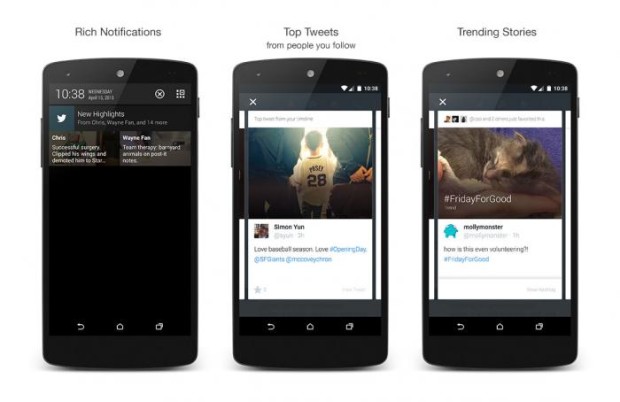 Since its inception, one thing has remained constant on Twitter: the default method of interacting with tweets has been in the form of an unfiltered, chronological timeline. Now, that’s beginning to change.

The company launched a new Highlights feature for its Android app today that pulls together the top tweets from a user’s network and presents them in a digest form so that people can keep up with what’s going on without spending all day keeping track of the social network. The tweets are pulled from people they follow, as well as accounts and topics that are popular among those people and trending topics in a user’s area.

When people opt in to the feature, they’ll get a notification up to twice a day that lets them know their Highlights are ready for viewing. After that, they’ll be able to take a quick glance at a curated list of tweets that show up in a card-based carousel. It’s an approach that’s reminiscent of Facebook’s News Feed, which uses an algorithm to pull in posts on the social network that are supposed to be the most relevant to users.

Earlier this year, the company launched a “while you were away” feature that collected some of the top tweets from a user’s network and showed them off at the top of their timeline inside the app to get them caught up on what they missed.

All of this is part of a greater strategic move by the company to make its service friendlier to people who aren’t already in the core demographic of Twitter users. The company is facing increased pressure from investors to improve its user numbers, and this feature may help bring people on board who don’t feel like they have time to keep track of everything that’s going on.