Apple CEO Tim Cook was the latest big-name techie to drop by The Late Show with Stephen Colbert last night, and like the calm, collected older brother who always brings a nice bottle of wine to dinner, he talked about a lot of big issues with Colbert with laughter and candor.

Two big topics? Coming out and all those Steve Jobs movies of late. 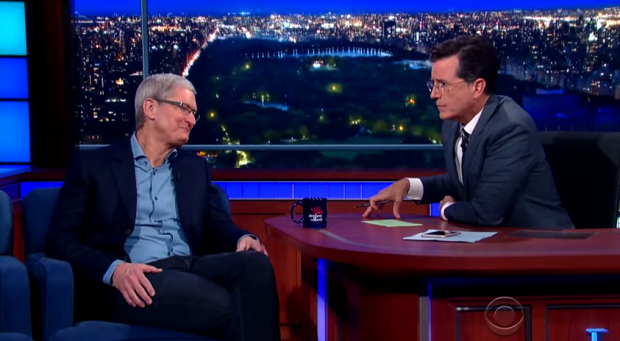 Cook told Colbert that a big part of his decision to publicly come out as gay was that he felt a responsibility to help kids being discriminated against. Of course, he gets a nice iPhone plug in there, too.

“I valued my privacy significantly, I felt that I was valuing it too far above what I could do for other people and so I wanted to tell everyone my truth,” Cook told Colbert. “Many people already knew, and so to many people it was no revelation. It was like discovering something on your iPhone that it’s always done, but you didn’t quite know it.”

Of course, Apple is coming off its big event from last week, and we reported that the company has already announced that it plans to “sell more than 10 million iPhones on its opening weekend.” Preorders started last weekend and iPhones will arrive in stores Sept. 25.

As for those recent Steve Jobs films, the documentary The Man in the Machine and the upcoming Aaron Sorkin self-titled treatment starring Michael Fassbender, Cook said that he isn’t too keen on filmmakers using his friend as a protagonist.

While Cook admits that he hasn’t seen the films, he told Colbert:

“The Steve I knew was an amazing human being. He’s someone that you wanted to do your best work [for]. He invented things that I think other people could not. He could solve things that other people could not. He had this uncanny ability to see around the corner and describe the future — not an evolutionary future but a revolutionary future. He was a joy to work with and I love him dearly and I miss him every day. I think that a lot of people are trying to be opportunistic, and I hate this. It’s not a great part of our world.”

Of course, Woz has seen the Sorkin movie and said that he likes it. Unfortunately, the documentary on Jobs was not so great.

The Cook talking about Jobs clip isn’t officially on The Late Show‘s YouTube channel, but you can certainly catch up on last night’s show with one of those streaming services. In the meantime, watch the clip in which Cook tells Colbert why he came out as gay.