Being a woman in tech can be tough, but these 13 companies are trying to create cultures that are more welcoming to women.

In a new report from the Anita Borg Institute — “The Top Companies for Women Technologists Leadership Index” — the organization evaluated 35 companies with a combined workforce of 435,000, with 91,000 of that workforce being women. The Institute then ranked the companies according to data they supplied to score them “on the representation of women at all levels and year-over-year trends in recruitment and promotion of women within the U.S. technical workforce.”

“BNY Mellon and all of the companies on the Top Companies Leadership Index have demonstrated a commitment to advancing women in technical roles and creating a culture where they can thrive,” said Telle Whitney, CEO at Anita Borg Institute, in a release. “While it is an important step that many companies publicly released data last year, ABI recognizes the importance of looking at the data in more detail to understand where women are getting stuck or leaving the field, so the industry-at-large can better assess progress and the challenges women face.”

Several other large tech companies made the list, including Apple, Google and eBay. Interestingly, GoDaddy also made the list, which is trying to carve a new path under the leadership of former Microsoft executive Blake Irving. (Irving is co-producing a documentary about the gender gap).

According to Anita Borg’s data, women account for about 23 percent of the workforce in tech. Only 18 percent of computer science degrees are earned by women, leaving them not only “underrepresented” but also causing them to leave “the industry at twice the rate as men due to the inhospitable tech environment.”

See the full list of the other companies who made the cut here: 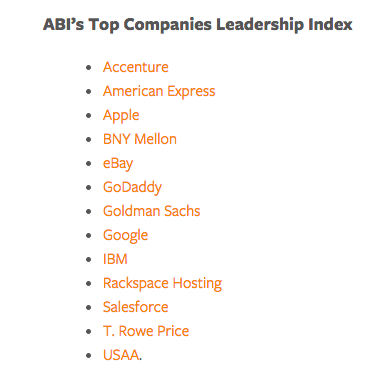