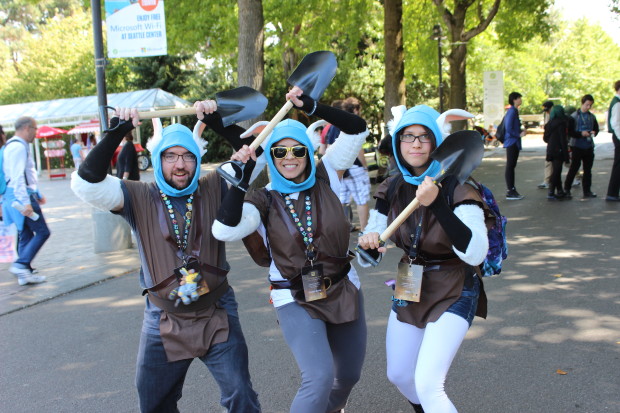 Why the heck do people like watching other people play video games?

That’s the question we had in mind today at Seattle Center, where thousands of video game fans gathered at Key Arena to watch Valve’s huge Dota 2 tournament called The International.

The world’s best Dota 2 players are competing this week for a prize pool worth a whopping $18 million — that’s more than the prize purse of a number of major sporting events, including the Masters, the Tour de France and the Kentucky Derby.

One of the more fascinating aspects of The International is the spectators, who come from all around the globe — we met people from the Czech Republic, Australia, Canada, and cities across the U.S. today — to watch the professional gamers compete inside a rowdy and loud Key Arena. Tickets to this year’s Dota 2 tournament at Key Arena sold out within one hour, so there’s clearly something exciting going on here.

We caught up with a few attendees to hear why they love watching Dota 2 so much. You can see their responses below or watch the video at the bottom of this post.

“I watch about two hours of Dota every night because my boyfriend plays. Actually, let’s say about four hours every night. I also started playing myself. I am very familiar with all the heroes just through watching my boyfriend play all the time. It’s just a really immersive experience. I even get pretty into it just watching him play. I think the fact that you are playing with other people and on a team together is just a really great experience. It’s a great example of a successful eSport.” — Anna MacDonald from San Francisco.

“I got into Dota after I saw the play from TI2 on Reddit and thought it was the coolest thing I’ve ever seen. So I started playing and I’ve put in about 3,000 hours into the game at this point.

I watch more Dota than I play. I watch 25 hours a week. It’s kind of like basketball — 5-on-5 with a regulation court. It’s really awesome competition. I’m not a fanboy about the players as much as some people are here, but I just really like that there are people who are so much better at a game that I play all the time. It’s just really entertaining.

In basketball or sports, I actually admire their physical feats and how large they are how fast they are. With this, it’s another type of skill. It’s just kind of amazing how good some of these people are. There are 110 characters you need to know to be good at the game and it’s kind of mind-boggling to know how good some of these people are.” — Justin Mozer from Los Angeles.

“It’s a beautiful game. I’ve played it nine years, I love this game and watching every big tournament. You also can meet a lot of people and artists at this beautiful tournament. It’s great.

As a spectator, you can see a lot of interesting things — builds, juking, reactions. It’s really awesome how they do it. It’s definitely great to watch.” — Jakub Mirola from Prague, Czech Republic.

“I wanted to visit this town, I want to visit the best players in the world.

If I watch football or ice hockey, this is the same to watch Dota for me.” — Paul Kacerla from Plzen, Czech Republic.

“I am to addicted to Dota. I’ve been playing for last 10 years of my life. Dota is more a part of who I am and not just a hobby. I’m here to show my love and give tribute to Dota.

To be brutally honest, it’s kind of like a drug addiction. You are searching for that next high, that really good game where you kick the enemy’s butt.

My costume is Wind Ranger. She’s a hero from Dota 2. I didn’t make any of this. I contacted a bunch of different vendors to commision each piece. I contacted a leather worker to make the leather pieces, a seamstress for the cloth, and a prop-maker to make the bow.” — Eunice W. from Seattle, Wash.

“We are here for the competition. It’s really stiff this year. There are two teams we are rooting for. EG obviously is the North American heartthrobs, and Team Secret — you can’t not like Puppey and Kuroky, they are great guys. We are here to cheer them on and see them to victory.

I like Dota 2 because there are hundreds of characters and hundreds of items. The reflex times of a half a second — it makes a huge difference. It’s like any sport, except I think there’s more variety and excitement and difficulty. And in most sports, if you get stomped in the first half, you’re done, you’re not coming back from 70 points. But you can be down 30,000 in Dota and it’s not over. It’s never over.

And in sports, you don’t die and respawn. You can do that in ours, so that is pretty cool. If we had magic, maybe I’d be more into football.” — Josh Johns from Baltimore, Md.

“But once you know what you’re looking for, some of the instincts you see, the decision making — it’s really, really phenomenal. In that arena, it’s electric.”
“Our paint is for Team Secret, which is the team we are rooting for today. Hopefully they make it to the finals. We are hoping for an EG vs. Secret finals, at which point we are rooting for EG. But we are rooting for Secret until they get there.

There are two 5-people teams in this game and the amount of coordination and teamwork is really amazing, as are the amount of reflexes and the incredible plays. We got into it playing together because we live in different places and so this is way for us to hang out together remotely. But then as we got more and more into it, we started watching some of the professionals play, and we were like, man this is almost a whole different game. They are just at a different level. So we were really excited to come out here this year. It’s our first TI and it won’t be our last.

It’s the Super Bowl of Dota. You can’t watch it if you’ve never played — it’s a little hard to do. But once you know what you’re looking for, some of the instincts you see, the decision making — it’s really, really phenomenal. In that arena, it’s electric. I love watching sports and I really get into it, but I’ve never been at a game or sports bar and seen people that are more excited and more pumped and into it than I have here — it’s really phenomenal to be in there.

And,  yeah, you don’t have tentacles coming out of the ground. Maybe if that was in sports, I’d watch more of that, too.” — Matt Johns from Baltimore, Md.

There’s so much to learn. I know I don’t know how to play all the heroes yet and there are still characters and skills I need to learn. Watching these people lets me understand and know what to do to be a better player.” — Marvyn Gutierrez from California.

I started playing the Dota beta and now I’ve just transitioned more into watching because I’m not all that good. But it’s like any sport. You have your spectators and you’ll have your players. It’s just such a nuanced game. There are over 100 heroes with all different abilities.

You live vicariously through the players. You get your favorite players — it doesn’t even matter if they are on the same team or not. It’s just like a fun spectator sport, I reckon.

I reckon this is better than regular sports. I don’t mind regular sports but I’m not really that into it. I’m more into gaming, so it works.” — Daniel Stott from Geelong, Australia.