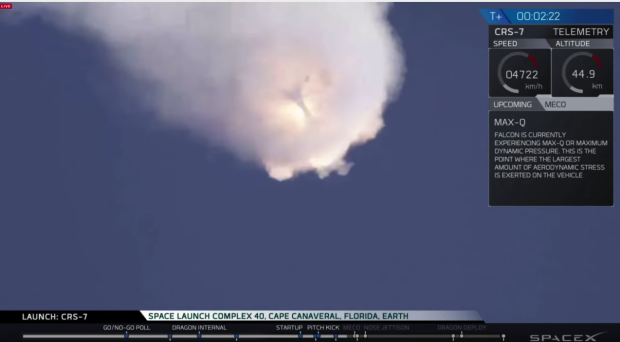 The June 28 loss of the Falcon, plus SpaceX’s robotic Dragon capsule and more than two and a half tons of cargo, will set back the company’s launch schedule by at least a few months and is likely to result in hundreds of millions of lost revenue, Musk told reporters.

SpaceX’s workhorse Falcon 9 rocket is grounded pending the conclusion of the company’s investigation and the Federal Aviation Administration’s signoff. Also, the debut of its Falcon Heavy launch vehicle will have to be put off until next spring, Musk said.

He said that the strut assembly would be redesigned and readjusted before the Falcon flies again, and that SpaceX would readjust its attitude as well.

Musk emphasized that the focus on a faulty strut was only a preliminary rather than a definitive determination of the cause, but here’s how he and SpaceX’s investigators think it went down, based on an analysis of data from 3,000 channels of telemetry: One of the steel struts holding down a bottle of helium inside the Falcon’s second-stage liquid-oxygen tank assembly broke loose during the first couple of minutes of flight. The helium is supposed to be released in a controlled fashion to keep the liquid oxygen under stable pressure, and the struts connected to the bottles are supposed to withstand 10,000 pounds of force.

But on June 28, something went wrong when the stress on the struts amounted to only 2,000 pounds. “It failed at five times below its nominal strength, which is pretty crazy,” Musk said.

Because of helium’s buoyancy, the bottle appears to have crashed up through the tank, Musk said. The helium rushed out and blew the tank apart, leading to the rocket’s catastrophic breakup.

The Dragon capsule’s cargo still might have been saved if the flight software had been updated to deploy the capsule’s parachutes automatically in the event of a second-stage failure. “It was on the agenda, but it hadn’t been done yet,” Musk said. As a result, the capsule hit the ocean hard, and the cargo was a total loss. The planned software update “will be done as of the next flight,” Musk promised.

Musk said thousands of struts from the same supplier had worked during previous flights without fail, but some were found to be substandard when they were tested after the accident. He declined to name the supplier. “I think that just results in recriminations,” he said. In the future, every strut will be individually tested.

Science journalist Alan Boyle is the author of "The Case for Pluto: How a Little Planet Made A Big Difference."

It will take a few months to address the strut issue, and Musk said investigators also want to look back through Falcon 9 data to identify any other potential problems. He declined to predict when Falcon 9 flights might resume except to say it would be “no sooner than September.”

The launch holdup has put a host of space missions in limbo — including liftoffs for the U.S.-French Jason 3 ocean altimetry satellite, telecom satellites for SES and Orbcomm, and SpaceX’s next Dragon cargo run to the space station. But Musk said the time line for sending astronauts to the space station by 2017 shouldn’t be affected. He said NASA and SpaceX’s other customers have been briefed on the investigation’s findings so far, and no one has canceled a launch … yet.

“Every one of our customers has been supportive,” he said.