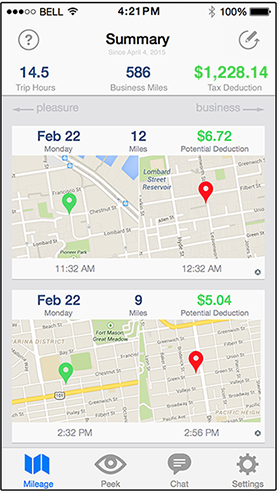 SherpaShare today launched a new version of its app, which is already used by more than 10,000 independent contract drivers working for fast-growing transportation and delivery companies like Uber and Postmates.

The app previously helped drivers track earnings and see insights from their performance, but a new update now lets users track total mileage and potential tax deduction across the different platforms, all in one place.

This can be a confusing and time-consuming process for many drivers that want to figure out exactly how much income they are actually pulling in, particularly for those that work for multiple services — SherpaShare says more than 66 percent of its users fall into this group.

Though companies like Lyft and Uber say they pay drivers — who aren’t considered employees, but rather contractors or “partners” — upwards of $35 an hour or $90,000 a year, actual earnings can be far lower when considering expenses like gas, depreciation, insurance, and taxes.

SherpaShare tracks all this data and shows users how they stack up against average earnings of drivers from their city. The app also gives users a real-time map and social feed of where other drivers are working to show the busiest areas of a given city.

SherpaShare was founded by Jianming Zhou and Ryder Pearce, who met in early 2014 and had a shared vision of helping the on-demand workforce grow.

“Currently ride-share and delivery drivers have a very difficult time understanding their true earnings,” Pearce said. “We help them understand their actual take home pay and when it’s most efficient for them to work.”

SherpaShare is free to use for now, while Zhou and Pearce — the company’s only employees — said they may roll out a premium service in the future. The startup raised a $700,000 seed round in February.