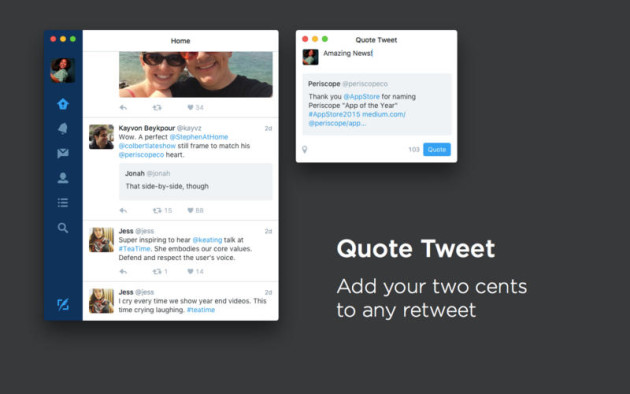 Twitter finally updated its official Mac client this week after about a year, bringing GIFs, inline videos and tweet quoting to the native OS X application. While some are glad that the app is getting an overhaul with Twitter’s latest features, others are disappointed in the quality and look of the new app.

However, Twitter may not have built the app itself, outsourcing the design and coding to another firm more dedicated to Mac development. According to a tweet from former Twitter employee Jonathan Wight, the app was originally slated for discontinuation, then brought back to life only to be given to an outside firm.

@gte Out sourced. There’s a long and sordid story behind it…

The Verge spoke to sources who said the app was built by Seattle-based firm Black Pixel, which has built apps for ESPN, Starbucks, and the New York Times. Black Pixel also rebuilt NetNewsWire, the classic RSS reader, into a modern Mac app that feels nearly native. The redesign of the Twitter Mac app has a similar feel to the NetNewsWire app, with native-looking elements that help it fit into the Apple-built apps.

Twitter has struggled to build up its user base in recent years and may have devoted engineering talent to fix that problem. Projects like Twitter Moments, polls and the change to Likes instead of Favorites, in addition to a strong focus on mobile apps, may have drawn attention away from the less-used desktop apps, the Mac app included.

Outsourcing apps isn’t entirely uncommon, but companies like Twitter and Facebook hire some of the best engineers to work on their products. But Twitter likely doesn’t want to spend resources on employing a Mac development team for just a few apps when most of their content is consumed on mobile devices or through a browser. That still leaves the question of why they bothered to update it at all. Maybe they care about consumers more than some users think.