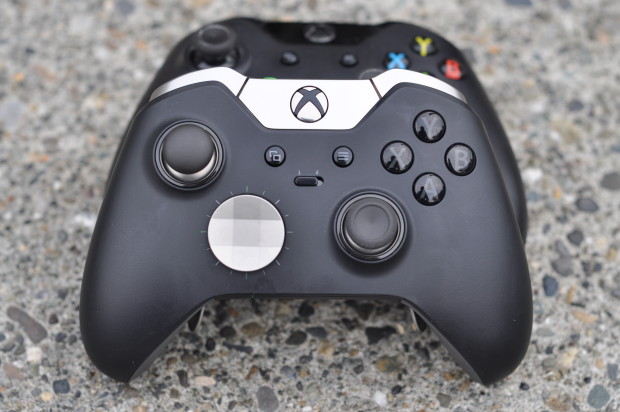 The new Xbox Elite Controller is over-engineered, extra-complicated and, at $150, three times the price of a regular Xbox One controller. And after using it for the past week, I don’t think I can game without it again.

Microsoft unveiled the Elite controller back at E3 as a way for top gamers to get more out of their machines. With customizable button mapping, interchangeable thumbsticks and directional pads, plus optional paddles that engage a players’ middle and ring fingers, the controller might be overkill for the casual gamer.

But it’s not just about the customizations; this controller is full of premium perks. The first thing you notice when picking it up is just how solid the construction is, with a noticeable-yet-comfortable heft. That’s thanks to all-metal triggers, the magnets that allow for interchangeable controls, and other solid components that provide clear improvements over the standard controller.

Next, you’ll notice the nicely textured grips — a huge upgrade over the normal controller, which can feel a little too slippery. When you finally turn the controller on, you’ll also be pleasantly surprised by the solid vibration engine. Much like the upgrade from the iPhone 6 vibration motor to the iPhone 6s “taptic engine,” the vibration on the Elite controller feels quicker and more realistic, taking less time to get up to speed and stopping as soon as the on-screen action is over. It’s a little touch that makes games feel even more immersive.

Customization, the main selling point of the controller, could hardly be simpler. Magnets keep the thumbstick, D-pad and new paddles securely in place. I haven’t had any of them pop off while playing during the week I’ve been testing the controller. But they are also easy to remove when you want to change things up. The only sticking points are that the standard D-pad option is a little tough to get off and replace with the satellite-dish version, and I can never get the paddles into the correct side of the controller on my first try (just like 4-dimensional USBs).

Customizing your buttons is just as easy. The Xbox Accessories app let you choose from pre-programmed layouts for games like Forza Motorsport 6 or Halo 5: Guardians, or you can map your own controls. For the latter, a quick-mapping option lets you just hit the button you want to change, then hit the button you want to replace it. Users can also control the intensity of vibration and how quickly each stick responds to your touch through the app.

You can also easily flip between two control schemes with a hardware switch on the controller. So if you’re switching between a driving game where you’re using the paddles to shift, and a first-person shooter where they’re better for reloading or changing weapons, you don’t have to remap them individually through the app.

You can also easily switch on and off the hair triggers with two hardware switches. While how hard you pull a trigger makes a difference in a driving game, a shooter doesn’t necessarily require such precision. The hair trigger switch stops the trigger right after the activation point, so you’re not wasting milliseconds pulling it too far when all you need to do is pop off as many rounds as possible.

For those that are fans of the paddles, you’ll probably get used to jumping into the app and changing your settings frequently, at least until you can get used to the new input method. But the paddles aren’t for everyone.

When I first got the test unit, I replaced the directional buttons with the paddles while playing Metal Gear Solid V: The Phantom Pain for faster weapon switching. But with all four paddles in place, my pinky was the only thing gripping the controller. After an hour, I had to take a break.

However, you don’t have to use the paddles. They easily slip off for longer MSGV sessions, but I can snap them back on for a few laps of manual-transmission racing around the track in Forza.

The same is true for the new D-pad and thumbstick options. You can switch between two D-pads (a traditional option and a rounder one) and three types of thumbsticks: traditional short ones, taller ones with the traditional dimpled head, and tall ones with rounded heads for smooth spinning.

Personally, I’m loving the saucer-like rounded D-pad for all my games, but the round-topped thumbstick really only works for me in shooters, and only for the left stick at that. Luckily, there are no rules on what you can use where, and switching them around is easy. You also don’t have to worry too much about losing all the pieces: the included case has a superbly molded sections for each of the little parts.

I hope I’ve got you sufficiently hyped for this stellar controller, because I’m about to remind you of the worst part: the price. As nice as this controller is, at $149.99 it’s beyond what’s necessary for most people. For the same price, you can get a Kinect, which may not control many games anymore but does let you talk to and wave at your TV like you’re living in the future. It also replaces the Kinect in the the $499 Xbox One Elite Bundle.

At those prices, you’d expect the controller to at least come with Microsoft’s Play and Charge rechargeable battery. But nope, you’ve got to spend another $25 to enable recharging, or just eat the price of replacing batteries every couple weeks. After my week of testing (which included a little more playtime than usual for me, but not much) I was left with a set of just-about-dead AA batteries.

The only other downside is that the thumbsticks are a little too heavy. When quickly batting a thumbstick in one direction, say to scroll down an on-screen menu, the momentum of the thumbstick can overcome the centering action, causing the selection to bounce back up. It’s a small annoyance, but one I ran into every single time I played and always slowed me down.

Still, this controller is utterly awesome. When I return the review unit to Microsoft and have to switch back to my normal controller, it’s going to feel chintzy by comparison. And I was a fan of the normal Xbox controller before this came around. But now, I might be parting with $150 come Oct. 27 when the Elite launches. I suggest you don’t test it out unless you are willing to spend $150, as well, because going back to your normal controller is going to be hard.