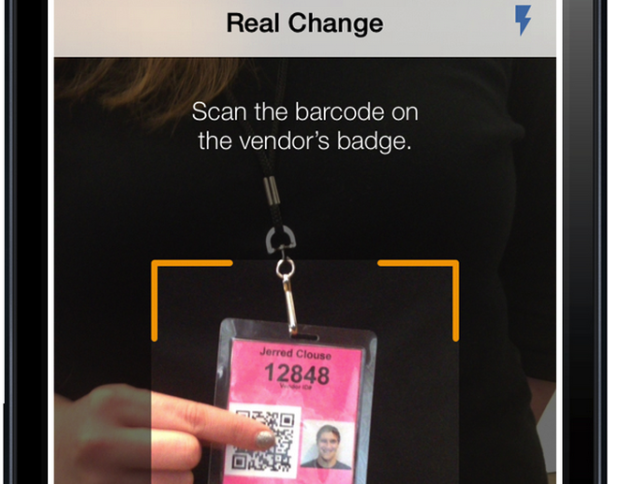 Seattle’s only street paper is reinventing itself with an app.

Real Change, the non-profit $2 weekly sold by street vendors who struggle with poverty and often homelessness, today launched a mobile app that will let people pay for issues electronically — opening a new revenue stream for vendors who previously could only accept cash.

“We think it’s going to be big, but we have no idea how big,” Real Change founding director Tim Harris said.

The app, developed at no cost to Real Change by a team of volunteers from Google, was designed to be as simple and secure as possible. Buyers just open it, scan the QR code on their vendor’s badge and select the new $2.99 digital edition to download.

Because these are in-app purchases, no credit card is required. You approve the purchase and you’re done.

That means that Apple and Google will recoup more from each sale of Real Change’s digital edition than Real Change itself.

(For the print edition, vendors earn $1.40 for every $2 they sell, and Real Change keep the remaining 60 cents — the same breakdown that’s been in place for cash transactions since Real Change doubled the paper’s price from $1 to $2 in April 2013.)

Real Change spent months agonizing over what the best payment model would be, but decided the convenience and reliability of in-app purchases were well worth it.

After all: With digital payments and the new mobile-friendly digital edition, the only way the organization’s revenue and readership can go is up.

The nonprofit is positioning itself to make the most of that. The paper’s first social media manager started work last week. And within a month, Harris said, Real Change will stop making its articles immediately free to read on its website.

All this digital enthusiasm may seem like too little, too late for a newspaper in 2015, but Real Change is not like other newspapers.

Forty-five percent of its $1,014,049 in revenue last year came from individual donations, 34 percent from circulation, and most of the rest from fundraising. Only 2.2 percent came from advertising and subscriptions. Advertising has plummeted for media in the last 15 years, taking much of the industry with it.

Real Change has never taken a significant revenue hit in the digital era. Since it became the second U.S. street paper to ever go weekly in 2005, it’s seen its circulation rise by 10 percent or more most years.

Real Change differs from most news media in another way. Though it employs a professional staff to write its award-winning local articles that advocate for the poor, its primary goal is to give its approximately 800 low-income vendors a job, a modest source of income and a way to escape the invisibility of poverty.

Similarly, the number one reason people buy Real Change, according to surveys, is to help the people who sell them.

“The relationship with the vendor is what it’s all about,” Harris said. “Those relationships change the way vendors see themselves.”

A handful of other street papers around the world have experimented with digital payments, with mixed results — sometimes because the payment methods have been obscure or complicated.

Big Issue in Cape Town, South Africa, has seen some success with an app called SnapScan. Thanks to South Africa’s dead-simple banking infrastructure, vendors can use the app to track payments, then go to any ATM to get their digital payload in cash.

The app’s Google volunteer developers designed the Real Change app to be easily adopted by other street papers, which they’ll likely appreciate.

Jill Woelfer, a Google user experience researcher who has led the volunteer development since last year, will help present the app at the International Network of Street Papers conference here in Seattle in June. It’ll be the first time that conference is held in the United States.

“Many of INSP’s 114 street papers, in 35 countries, are facing issues based on the continuing march of our cashless society,” INSP Chief Executive Maree Aldam said in a statement. “Innovative solutions such as Real Change’s app show how dynamic street paper organisations can continue to provide employment to some of the most vulnerable people in society, despite the new challenges they face.”

Digital sales are not mandatory for Real Change vendors. Only about 40 of them have been trained to go live with the app today. The rest are in wait-and-see mode, Harris said. Early adopter jitters.

Harris and Woelfer acknowledge that there’s plenty more the app could do. It doesn’t currently let buyers tip electronically, another payment system trade-off. Vendors make about half their money in cash tips, Harris said.

Google employee Gulay Birand kicked off the volunteer project after she helped Real Change with computers Google had donated. When she learned that cashlessness was a barrier for vendors, she began recruiting others at Google to volunteer in their off-hours to help find a way around it.

The app is free to download on iOS and Android. (Update: There’s a delay in availability of the iOS version.) Google does not own the app and will not make money off its development. In fact, thanks to its volunteer donation matching program, Harris said, Google paid Real Change a $5,000 donation for volunteer hours worked by its employees.

Google’s volunteer team has agreed to provide support for the Real Change app through December.

(Update, 11:53 a.m.: Information about pricing in the app has been corrected.)