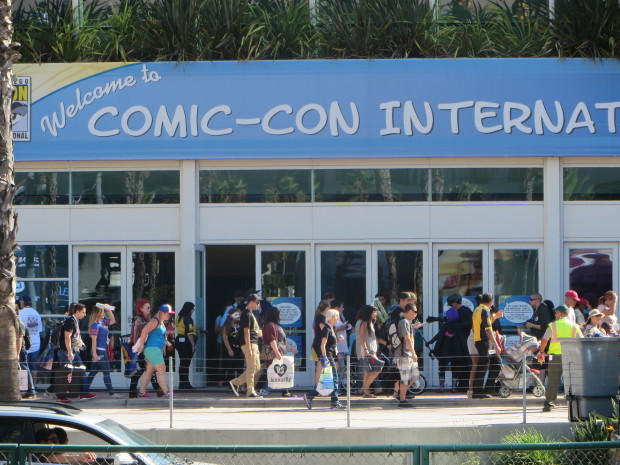 Commentary, photos and videos of International Comic-Con 2015’s big moments abound. Most are written in the moment, reporting the sights and sounds, shock, joy or dismay. Those visceral moments — shared by dozens, hundreds or thousands of fans — are far from universal. Each person brought his or her experiences, expectations, biases, loves and desires to Comic-Con. Comic-Con sprawls across San Diego and across time, and each person who attended left having experienced a unique version of the event. Writing about things I didn’t experience would be disingenuous. So I thought it would be best to share the gadgets and gizmos, moments and adventures that represent my own private Comic-Con 2015.

Sharing Comic-Con with my daughter: Late in my daughter Alyssa’s teenage years, I introduced her, my wife Janet and my other daughter Rachel, to Buffy the Vampire Slayer, through the episode “Once More with Feeling.” While Janet and Rachel enjoyed the episode, and watched a few more, Alyssa and I bonded over Buffy. Soon after that, Alyssa, who modeled as a child and still models for Seattle’s Zulily, decided her fate lies behind the camera. It was great to share this event with her for the first time. Alyssa and I shared our passion for pop culture while we each let our 11-year old inner child soak up the magic of myriad alternative universes.

Meeting Joss Whedon: My friends at Dark Horse Comics helped save us wristband wrangling, one of the less pleasurable Comic-con activities. We showed up on time and were injected into the Joss Whedon signing line just before the writer/producer emerged onto the dais. Whedon “produces” Dark Horse’s Buffy the Vampire Slayer, Serenity, and Angel and Faith comics. Alyssa ended up not only with Joss’s signature, but with a charge in his handwriting to “go run shows.” I told Joss of my daughter’s transformation from an exclusively Disney Princess girl (who still LOVES Belle) to a Buffy the Vampire Slayer superfan. He asked for any Princess stuff we weren’t using, presumably for his daughter Squire. 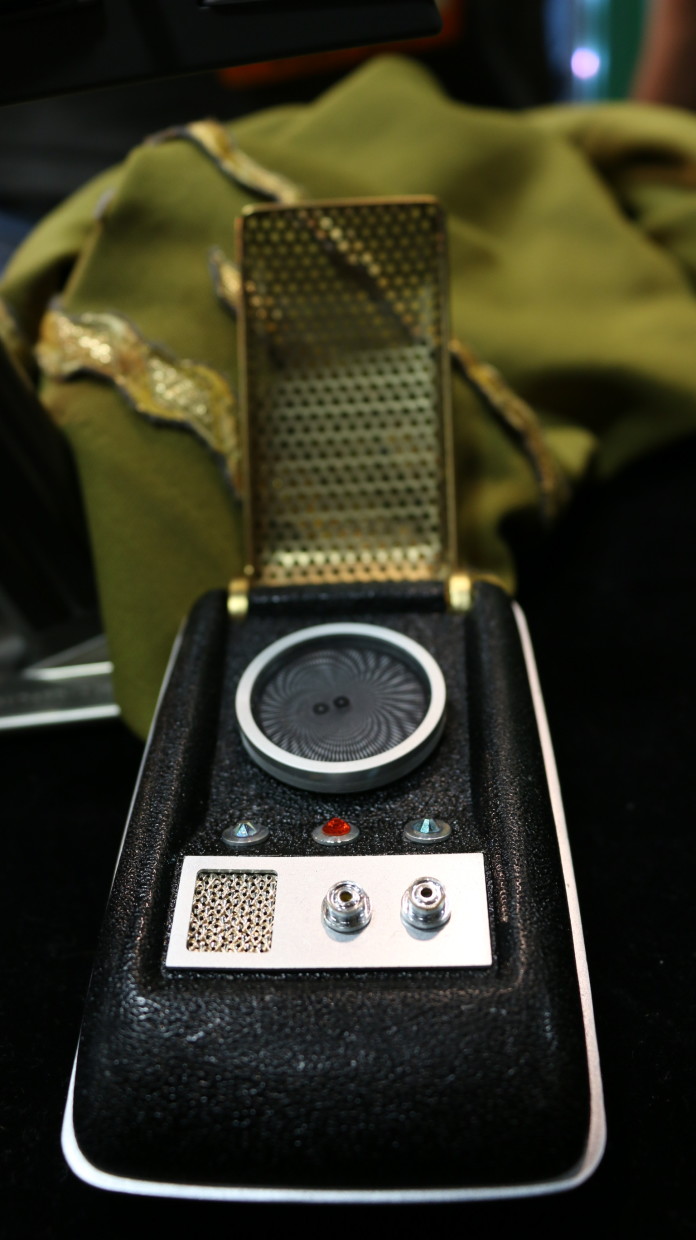 Bluetooth Star Trek Communicator: I am a Star Trek fan. I attend Comic-Con as working press, sporting a sport coat adorned with a Star Trek communicator pin on its lapel. So for me, the ThinkGeek preview of The Wand Company’s Star Trek: TOS Bluetooth Communicator was a must see. I activated it, watched it invoke Siri, and listened as it played several communication-oriented lines from the show and its character. It charges wirelessly through its stand, employs a high-quality MEMS microphone and is constructed from high-grade materials. They won’t be shipping until early 2016, but after seeing the prototype I can’t imagine a future now where a Star Trek Communicator isn’t the primary interface to my iPhone.

People Being Accepting and Nice: Alyssa nominated this one. For a kid raised mostly in the suburbs of the Seattle suburbs, racial issues and the negative emotions and actions seen recently in America’s inner cities weren’t part of her experience. But even coming from a world of acceptance and tolerance, she noticed Comic-Con’s elevated sense of belonging among the attendees. “People are just nice,” she said.

Childhood’s End on SyFy: As much as I love anything Sci-Fi, I have a particular place in my heart for old school stories from Asimov, Clark and Heinlein. The only media conference I attended was the one for SyFy’s Childhood’s End, a 3-night mini-series to run late in the year on SyFy. Clark wrote his classic novel a decade after having seen dirigibles flying high above London in World War II. His short story, which later became a novel, included giant spaceships filing the sky. From those ships, Overlords directed human evolution, making it ready, through its children, to combine with the great cosmic consciousness. This is a hard book to turn into a movie, because, as director Nick Hurran said during our interview, “the middle section of Childhood’s End is essentially a book of ideas, of big questions.” While writer Matthew Graham confessed to creating additional plot, such as how a planet becomes a “utopia,” shortening the timeline and changing a few names—he also said he always strove to honor the ideas Clark was exploring and the questions he was asking. I look forward to seeing this Clark novel come to television where six hours will do it more justice than the constraint of a 2-hour theatrical release.

Unexpected Technology: Actual real-world technology is not something you expect to see at Comic-con amid the light sabers, phasers and styrofoam guns, but there were few very interesting behind-the-scenes technologies I found intriguing.

The first was Varner Studios, Inc., the firm behind many of the high quality sculpts you on display at comic book shops and cons. Steve Varner started with life-sized sculpting, including work on the 1976 King Kong. He now creates models for collectables and action figures. Seeing the equipment, the precise work and the resulting prototypes was inspiring in a world where so much about how our “stuff” gets created is opaque. You can find out more at the Varner Studios site.

The second cool technology was from NASA. Well, NASA being at Comic-Con for the first time was actually cooler than the copy of Robonaut 2 that was on display, complete with virtual reality interface. NASA reaching out to inspire the next generation to transform dreams into reality is a good step for organization that so inspired much of the great science fiction of the 1960s. I hope we find a way, as a nation, to help NASA get is groove back and our spirit of adventure with it. 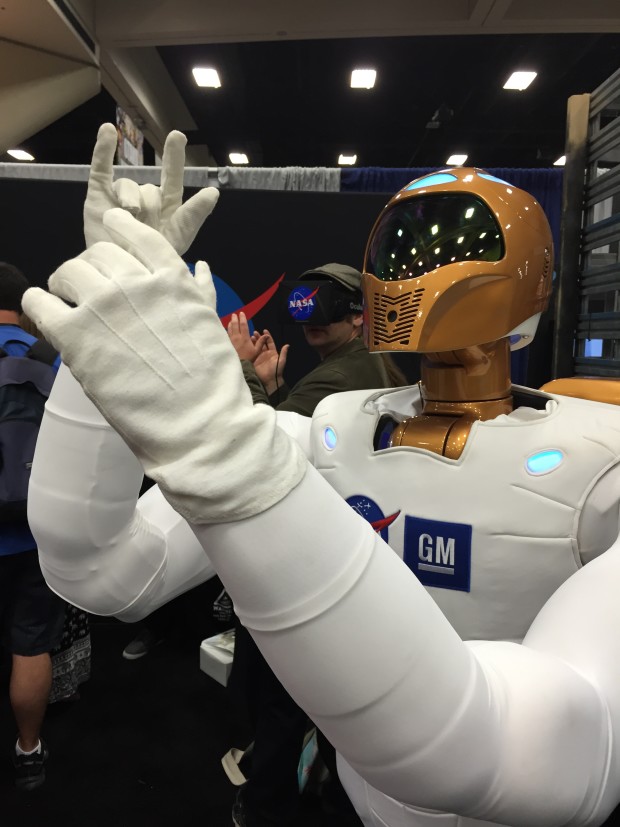 On a slightly more earthly weave, Full Gear showed off a 3-D custom shirt web-based design system that results not just in custom shirts with logos, but with wrap-around designs. They print on fabric with a dye sublimation process, then cut, then sew. No screen print cracking or peeling. Another interesting process made more transparent, and more accessible, through technology.

X-Men Days of Future Past #RogueCut: Things happen in the real world of Comic-Con that don’t happen in the real real world. In the real real world, J.J. Abrams doesn’t invite thousands of Star Wars fans from a giant presentation hall to attend a concert. I wasn’t in Hall H for that, but I was at the much less-raucous screening of Fox’s Blu-ray cut of X-Men: Days of Future Past, known as the “Rogue Cut,” which includes about 17 minutes of new footage that director Bryan Singer restored in an alternative Blu-ray version. In the Comic-Con real world, Bryan Singer bounded into the theater to share his vision with the audience, including character Rogue’s critical new role in the film. Fox put on a nice event with four screens running simultaneously in San Diego’s Reading Cinema. With the exception of the explicit Rogue integration, and longer screen time for actress Anna Paquin, it was hard to tell where the changes were made, which was just fine (unlike Star Wars recuts that so obviously both added and detracted). Free popcorn and soda were had by all.

Accidentally Running into Stan Lee: Alyssa and I were walking around San Diego’s Gaslamp District Friday evening. We were thinking of heading back to the hotel when I remembered LINE Webtoon had sent me a event invitation. We walked a few short steps to Lou & Mickey’s. We were quickly informed that the panel was almost over, but they still had a big announcement to make. Just as we walked through the door, Stan Lee was introduced, so we had to shuffle past Stan migrating to the stage while we moved into the room. Stan announced his partnership with LINE Webtoon and POW! Entertainment to discover new talent through the company’s Superhero Comics Contest. The contest will give aspiring creators the opportunity to submit their Superhero-themed comics for the chance to win $30,000 and the once-in-a-lifetime opportunity to receive Stan Lee’s guidance and feedback. Great to see real money being invested in the next generation of artists and storytellers.

The Buffy The Vampire Slayer “Once More with Feeling” Sing Along: To circle back to the beginning, Alyssa and I ended the Con with in a Whedonesque way: singing with hundreds of synchronized souls to Joss Whedon tunes that make the Buffy episode “Once More with Feeling” a classic. There is no better way to end Comic-Con than to sit in a dark room with people who clearly share a deep interest, even a love, and to co-create an experience with them. Imagine a combination of karaoke, big screen television show and rock concert. During “Walk through the Fire” fans held up phone screens and virtual candles while Sarah Michelle Gellar blasted out the line “Let it burn” over and over. The crowd shouted “klepto” when Dawn pulled the talisman from her jewelry box, and they laughed heartily at Anya’s fear of bunnies.

While this session ended with an hour left for shopping on the show floor, Alyssa and I took this as our cue to exit. The best way to depart Comic-Con is uplifted, connected and spiritually refreshed. We weren’t thinking about our aching feet or how to get tubes of posters into the overhead bins…we were just thinking…this time next year in San Diego.