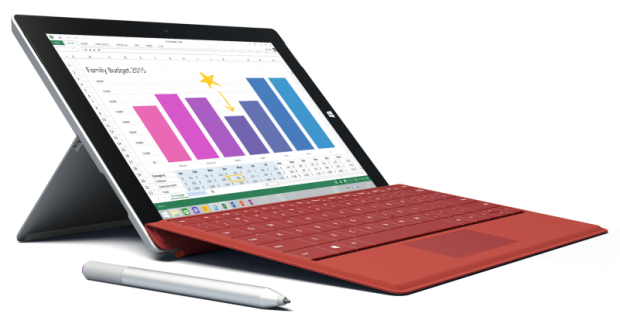 Microsoft just unveiled the latest version of its baseline Surface tablet, the Surface 3 — switching to an Intel Atom processor, and leaving behind the ARM-based processors that powered the first two versions. The change means that the new tablet runs a full version of Windows 8.1 and traditional Windows apps, not the Windows RT operating system, which was limited to Modern UI apps.

“With full Windows, it will run the desktop applications you depend on for work or school,” said Panos Panay, the Microsoft vice president in charge of the Surface line, in a post announcing the new device. “This point is so important to understand. You are not compromising anything when you buy this device. For my kids, they can now do everything they are asked to do at school and still play the PC games they love on this device.”

It’s the latest effort by Microsoft to gain traction in a market led by Apple’s iPad and tablets that run Google’s Android operating system.

The Surface 3, starting at $499, comes with a 10.8 inch screen, slightly smaller than the 12-inch Surface Pro 3 introduced by Microsoft last year. The new tablet uses a 3:2 aspect ratio, giving it less of a horizontal orientation when in landscape mode, and also making it more reasonable to use in portrait mode than its predecessors were.

It runs a quad-core Intel Atom x7 processor. The kickstand has three preset positions. Microsoft will be selling a Type Cover and a pen for the Surface 3 separate from the device. It has a USB 3.0 port, a Mini DisplayPort, and a microSD card reader, with a 3.5 MP front camera and 8 MP rear camera, both of which can record 1080p video.

It’s available for pre-order now, shipping in early May. It comes in 64 GB and 128 GB models, and 4G LTE versions of the device are listed as coming in June.