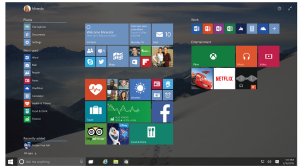 Windows 10 beta testers who want more updates will be getting more of what they wished for soon. Microsoft just pushed a new build of the technical preview for its upcoming operating system to people who have elected to participate in “Fast ring” updates to Windows 10.

The update also comes with a promise from Microsoft’s Gabe Aul that the company is working to increase the number of builds it puts out to the public as the full release of Windows 10 draws closer. People who opt in to faster updates (in addition to running a beta version of the operating system) will get features faster, but with a risk.

“For those of you in the Fast ring we do expect to deliver builds with newer features and fixes more often, but you’ll also see more bugs with fewer workarounds,” he said. “I also don’t want to set expectations that you’ll see new builds daily or weekly. We will still have regular periods where we’re integrating new code that needs to spend time stabilizing, so we’ll have some weeks where we expect builds to flow out (we call them “flighting windows”) and some where we’ll hold back.”

Today’s update brings a bunch of new features to people who opt into it. including the addition of Cortana support for more countries, the ability to drag windows between virtual desktops and a lock screen that informs people about new features in the latest build of Windows 10. It also fixes a few bugs, including several that prevented the Start menu from launching.

As expected, the update also includes a few known bugs, like one that prevents the username and password boxes from showing up or accepting input at login.

The update comes as Microsoft announced that Windows 10 will be available starting this summer.