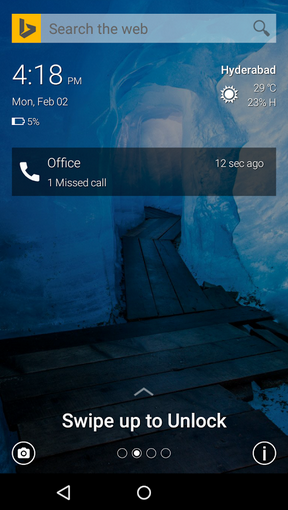 I just spent a few minutes testing the app on my Samsung Note 4, and I’m impressed for the most part. In a nutshell, the app acts as a second home screen and lets you access certain tools and information without having to unlock your phone.

The Note 4 doesn’t allow you to set app shortcuts on the lock screen, but Picturesque Lock Screen does, so I’m thrilled about that. There is also a bar with buttons to control WiFi, Bluetooth, ringer volume, screen brightness, and a flashlight. In addition, there’s a button to quickly launch the camera, which is also nice. 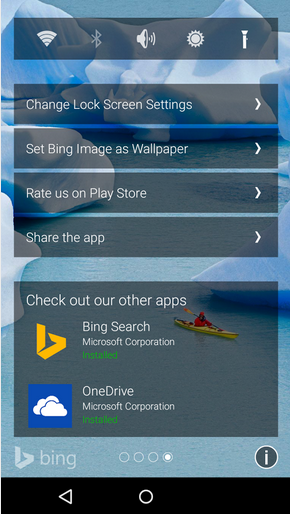 Another cool feature is the ability to shake your phone to see a new lock screen background photo, which Microsoft pulls from Bing Homepage images. I also like the embedded Bing search bar — this could potentially pull Android users away from using the Google search bar. The news stream, which is accessed by swiping right, is also a nice touch and provides an easy way to scroll through stories without unlocking your phone.

The app already crashed on me once, so that is a bit concerning. Also, those that use their lock screen for security reasons may not end up liking Microsoft’s new tool. So far, the app has a 3.8-star rating from 338 reviews on the Google Play Store.

The release of Picturesque Lock Screen for Android users comes just a week after Microsoft launched a new Outlook email app for iOS and Android.