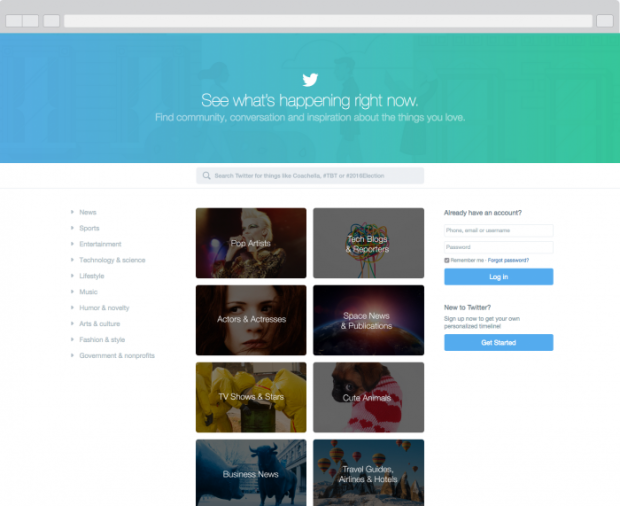 Twitter wants to draw in more readers to its social network without requiring them to make an account in order to catch the latest Tweets. That’s the focus of a new homepage the company is rolling out to people who haven’t signed in to the social network.

Instead of just showing a sign-up screen, the page will include lists of different interest areas that people can choose from, like “Pop Artists,” “Space News & Publications” and “Cute Animals.” Each of those includes a timeline of tweets from a curated list of the most popular users who write about that topic. It’s a way for people who don’t want to create an account or haven’t seen the utility of one to get a glimpse of what’s going on right away.

Right now, the redesign will only be available to users in the U.S., but Twitter is evaluating its roll-out around the world.

According to Twitter, millions of people who don’t have an account visit the social network every month. By offering them this experience, the company has a way to attract more logged in users over time, as well as a new dedicated space that it can sell ads against to boost its revenue.

That’s good news, since Twitter has been facing increased pressure from Wall Street to grow its user base and the amount of money that it’s making.