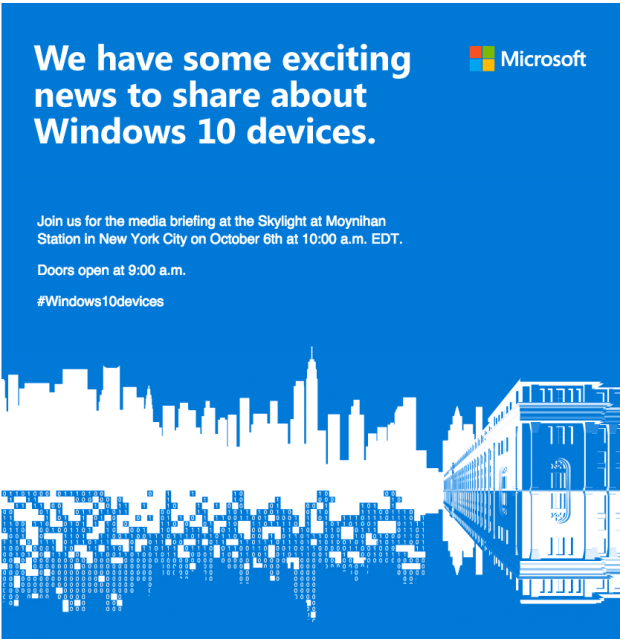 Microsoft sent out cryptic invitations on Monday for an October 6 press event in New York that will be all about Windows 10 hardware.

The event was already stirring up a lot of hype before it was officially on the calendar. According to The Verge, this will be when the company unveils all sorts of new gadgets, including a Surface Pro 4, Microsoft Band 2 and two flagship smartphones called the Lumia 950 and 950 XL.

Of course, none of that has been confirmed by Microsoft. The invitation just reads, “We have some exciting news to share about Windows 10 devices.”

We still don’t know a whole lot about Microsoft’s new Surface tablet or Band fitness tracker, but the rumor mill is starting to gear up. ZDNet and The Verge are both hearing the Surface Pro 4 will be faster, lighter and thinner, but won’t look drastically different from its predecessor. Meanwhile, a lot has leaked about the new smartphones, including supposed photos.

Microsoft CEO Satya Nadella has promised the “widest range of Windows hardware” ever available by the holiday shopping season. That would include devices built by third party manufacturers, but it’s safe to say the company will have some of its own goodies to bring to the table as well.

Windows 10 is already outperforming previous Windows 10 launches, reaching 75 million devices within its first four weeks. Key to the company’s strategy was to build an operating system that runs on a variety of form factors, tying all your gadgets together with one common user experience. If this October event lives up to all its hype, this could be the first time we see Microsoft’s grand vision coming together exactly the way it wanted.