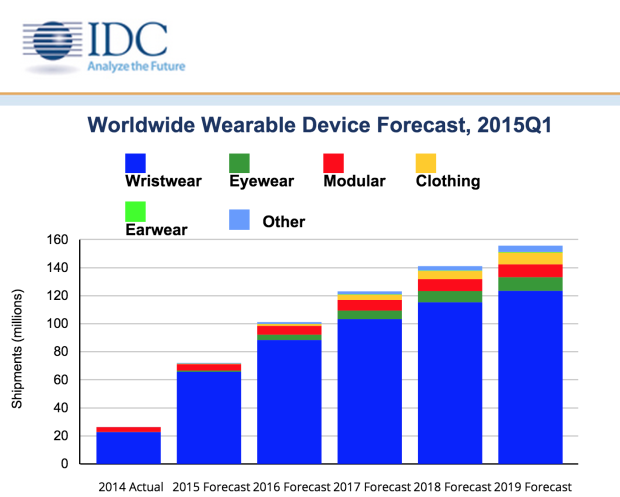 The wearable device market is forecasted to nearly triple this year, driven by sub-$100 activity trackers, according to a report by IDC. In 2016, high-end options like the Apple Watch and Android Wear devices will likely drive wearable adoption, but shipments of the ultimate wearable, clothing, might increase tenfold by the end of the decade.

Wrist-worn activity trackers are obviously driving the market now, with Fitbit, Microsoft and even Xiaomi providing a range of decent options that send data to smartphones. But smarter devices that can be upgraded with third-party apps and provide more robust notifications are becoming more popular.

The non-watch market is also predicted to grow, with Microsoft’s HoloLens and other eyewear options expected to comprise 3.8 million units in 2016.

“Smart wearables like the Apple Watch and Microsoft’s Hololens are indicative of an upcoming change in computing,” senior IDC research analyst Jitesh Ubrani said, “and the transition from basic to smart wearables opens up a slew of opportunities for vendors, app developers, and accessory makers.”

Modular wearables already have a presence on the market, but aren’t expected to grow as much as other areas in the coming years. However, computerized clothing is likely to gain popularity as Google’s Project Jacquard and other smart fashion items emerge.