Ignite is a storytelling movement with the slogan “Enlighten us. But make it quick.” What they mean by “quick” is 5 minutes. You get 20 slides and 15 seconds per slide to tell your story.

I did Ignite Seattle 27 at Town Hall Seattle. The theme was “experimentation,” and I talked about experiments I did to improve my relationship with my teenagers. My talk also ended up being about why I started Pixelkin. (Turns out playing video games with kids is a great way to connect with them!) You can watch the talk in the video above and read the transcript right here.

When your kids are little, they want to talk to you all the time. They want to follow you into the bathroom, even. And then something happens and they become…TEENAGERS. Sometimes teenagers do their homework and complete a dozen college applications all by themselves and breeze right through the teen years. For others, it’s not so easy. Parents and kids don’t always get along. Sometimes your kid stops talking to you. I was the kind of teenager who didn’t talk to my parents much, and my son was like that too.

When you’re a mom and your teenager stops talking to you, you can worry. You think “fiery crash!” You think “dead in a ditch!” As a mom, I worried A LOT.

But I’m a person of action. So I tried some experiments to improve communication. The first one was pretty fun! At 47 I learned to snowboard. The results were not the best. I guess you could say I had trouble keeping up with my son, who just turned his board straight downhill and flew. Not so conducive to conversation.

Later, I tried something a little less fun. I took the car keys and told my son I’d give him a ride anytime and anywhere. The price of the ride was listening to my life story. I think he learned to understand me a little better. But maybe I ended up talking too much. There was a point when he just said, “TMI, Mom.”

Out of desperation (almost), I asked him to teach me how to play video games. He’d always liked games and I figured I’d give it a try even though video games had never been something I was interested in. At the age of 50, I got handed a controller. On video game controllers, there are about 17 button-type things you can mash, plus at least one joystick. Kids seem to be able to pick up a controller and go for it, but at 50 your brain doesn’t work that way. I had to think about every button or trigger or bumper I pushed.

The first game I tried was The Legend of Zelda: Ocarina of Time, a true retro classic. Gohma the spider monster was the very first boss I had to defeat. Ironically, she’s a mother too, and her babies hatch and attack you. That would freak me out. It took me probably about a week to beat her, playing a couple of hours a day, because I was so slow and I freaked out so much when the babies came after me. But here’s where things began to flip around. My kids began to coach me.

Later we played these incredible games called Portal and Portal 2, which are so hard they make your brain hurt. You can play one robot and your kid can play the other. 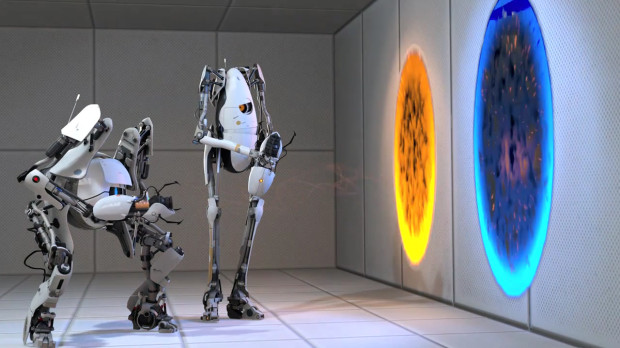 I wasn’t very good at this game either. But something GREAT happened. I learned that my kids had reservoirs of patience and creativity beyond what I’d ever realized. They were SO SMART. Way smarter than I was. And we were on the same side for once!

Games can have beautiful art and music. And they help people learn. Kids learn reading, typing, history, even math and science. They also learn about teams, leadership, persistence, and empathy.
Later my son taught me to play this game called World of Warcraft, a massively multiplayer online role-playing game (MMORPG). If you don’t know what that is, it’s okay. Because what’s important is that this is a game where you talk to one another while you’re playing. You play this game for hours and your kid will basically talk to you the whole time—it’s like trapping them in the car with you, only better.

Not only that, but video games are just full of interesting stories these days. Playing with your kid gives you a chance to talk about war, social justice, ethics, even gender roles and sex. And to ask questions like: “Shouldn’t this scantily clad female warrior really have more functional armor?”

Games can have beautiful art and music. And they help people learn. Kids learn reading, typing, history, even math and science. They also learn about teams, leadership, persistence, and empathy.

Playing video games with my son, I got so convinced that they’re amazing learning tools that I started giving small grants to digital learning projects through the Ludus Project. One of the projects we’ve funded is at the Gulf of Maine Research Institute, where they use games to teach kids about ocean conservation.

Eventually I started Pixelkin.org to help parents navigate the world of video games. People can go to Pixelkin and find games they haven’t heard of or get advice about screen time, careers in game development, and lots of other stuff.

Here’s the thing: Video games still have kind of a bad reputation, but 97% of teenagers play them, and a whole lot of young people consider video games their primary form of entertainment. I’m here to tell you that’s probably not going to change. Now only about half of parents play games with their kids, and I think that’s a huge lost opportunity!

I would encourage all parents to play video games with their kids, but there’s something way more important. That important thing is connecting with your kids in any way you can. The fact is that when your kids are teens, they still need you, even if they don’t always give that impression. If you’re lucky and you do your own experiments, you’ll find some way to keep connected to your kids—whether it’s video games or something else—all the way through the teenage years and beyond.