SAN FRANCISCO–Eric Schmidt thinks it’s high time for companies to see that there’s not a difference between enterprise and consumer customers. The Google Executive Chairman said In an interview with Box CEO Aaron Levie at the cloud storage company’s Box Dev conference in San Francisco today that companies – even those traditionally entrenched in the enterprise – need to break down the walls between big businesses and everyday consumers. 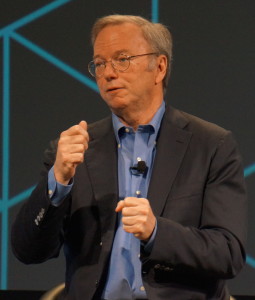 “What I hope will happen is that this artificial distinction of consumers and businesses will go away,” Schmidt said.

In particular, Schmidt said that enterprise software has to evolve in part because users are bringing their work home with them and bringing devices to work. In addition, he said that consumers are interested in top-notch security, and they should be offered similar protection to enterprise customers, despite past conventional wisdom.

“Talk to a consumer,” he said. “The consumer wants just as much security as the enterprise.”

Looking forward, Schmidt said that there’s a wide open future for startups to come in and build a mobile-optimized experience based in the cloud that works better than the existing products in the market. In his view, there is plenty of room for a smaller company to leverage the power of the cloud in order to provide a better experience than incumbents in the market.

“If it’s a good enough product, (enterprises) will buy it,” Schmidt said.

Stay tuned to GeekWire for more from Box Dev, including news from Levie’s keynote.