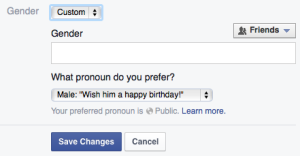 Facebook has tweaked the gender options available on the social network so that people who don’t conform to a traditional male/female gender binary can have a profile that better matches their identity. Starting today, the company is rolling out a new setting for users’ profiles that allows them to set their gender as male, female or “other.”

Those users who choose the last option will be able to type out their preferred identity in a text box, and select what pronouns they’d prefer Facebook use for them. (People can choose from he/him, she/her and they/them.) Right now, the sign-up screen for new users on Facebook’s homepage still requires people to choose from either Male or Female before they can get an account.

While Facebook helpfully informs users that their preferred pronouns are public across the social network, the company will allow them to set a privacy setting for their gender, so they can keep it private, or only disclose it to a particular subset of their friends, if they don’t want to advertise their gender identity to the world.

The move builds on options that Facebook rolled out around this time last year, gave users a wide set of predefined gender options to choose from. That was a step in the right direction when it came to acknowledging the existence of non-binary gender identities, but it didn’t cover the whole universe of possibilities that exist.

It’s not all sunshine and roses, of course. People who use non-standard pronouns (like zie or hir) won’t be able to have those choices reflected on the social network.