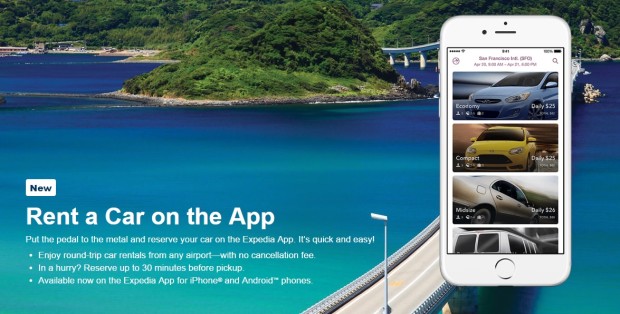 Expedia has finally expanded its mobile app to enable customers to book rental cars and local activities in addition to flights and hotels.

The Bellevue-based online travel company also updated the app’s appearance to emphasize these four major categories, by creating four colorful buttons at the top of the app, with each one designating one of the categories. 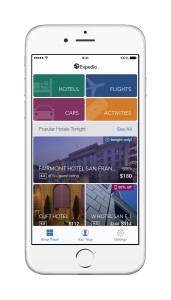 Rental cars and local activities are now available in the U.S., and will be rolling out to the app in the UK, Canada and other markets in the coming months. Previously, the app, which is available on iPhone and Android, only sold flights and hotels.

The company said its top priority is providing consumers access to all of its lines of business since travelers are mobile by nature. “Consumers tell us what they want in their mobile offerings, and we’ve been steadily delivering,” said John Kim, Chief Product Officer at Expedia, in a release.

Expedia said last year, one in five flight and hotel searches occurred on mobile devices, and that more and more customers are searching on multiple devices, For instance, in November, nearly 30 percent of its U.S. customers used two or more types of devices to search the site, and 5 percent of people used at least three devices.

Customers, who reviewed the most recent iPhone version, gave the app three out of five stars. One reviewer, who gave it five stars said, “Didn’t realize what I was missing before this update. Finding and booking nearby activities is pretty cool.” Another more critical review provided feedback that there was no way to book a one-way car rental. “Won’t allow me to type in box for drop off location,” the reviewer wrote. 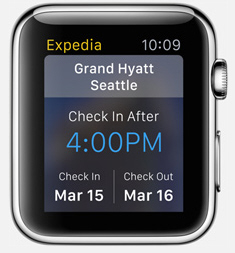 Other new features include more choices in making hotel purchases, including the ability to “Book Now, Pay Later,” which enables customers to reserve a room (for select hotels) without paying until check-in. Tablet users will also notice new “travel collections,” which allow customers to get inspired to check out new destinations. For example, one collection is called “Fun for all ages,” while a second is called “Global National Parks.”

Beyond the iPhone and Android apps, Expedia was also quick to support the Apple Watch. The app allows Watch owners to receive notifications for flight status and gate changes, view hotel addresses and check-in times and access upcoming travel details for flights and hotels.