Apps like RunKeeper and Strava have utilized smartphone technology to help runners track their workouts and compete with friends. Now, two entrepreneurs want to implement something similar in the weightlifting world.

Eric Wagner and Bryan Alger are the co-founders of Gravitus, a new startup based out of New York City that lets recreational lifters log workouts, track progress, watch instructional videos, compete against friends, and more.

The entrepreneurs first met in Seattle seven years ago while both were working for Microsoft. They reunited last year after seeing an unmet need among weightlifters given the popularity of similar apps that runners use while they exercise. 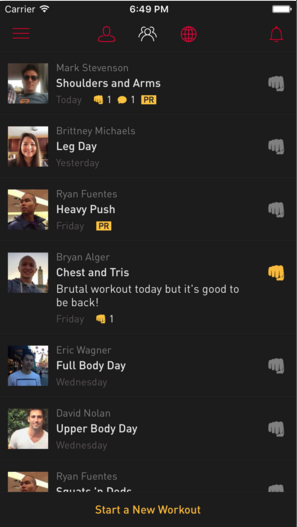 “We could go on a run and have a great mobile experience while feeling connected with other runners, but there was really nothing for the gym,” said Wagner, who worked at a Seattle-based startup called GoTime after his stint at Microsoft. “There were a handful of existing apps, but most were just basic trackers that replaced a paper and pen.”

While Gravitus offers a way to efficiently track a workout, that functionality is largely available with other existing apps. The startup separates itself with social features that let weightlifters see how their peers are working out — for example, how much weight they are lifting, how many reps they are completing, etc.

“Lifters are competitive, but they haven’t had a chance to see those numbers from other athletes,” Wagner said.

More advanced tracking capabilities will be implemented in the future — supersets, drop-sets, timers, etc. — and Gravitus has high-level revenue-generating ideas like virtual coaching and other special premium add-ons. Wagner and Alger are the sole Gravitus employees and are bootstrapping their venture for now.