But students, their parents, and adults seeking to re-direct their careers shouldn’t kid themselves about what sort of preparation is most likely to lead to a career as a software engineer at a leading-edge tech company – whether the smallest startup, or one of the giants like Amazon, Google, or Microsoft

Regardless of what Software Engineering Daily would have you believe about bootcamps, leading-edge tech companies of all sizes focus on recruiting the top Bachelors, Masters, and Doctoral graduates from the top Computer Science programs – programs such as those at Berkeley, Carnegie Mellon, MIT, Stanford, the University of Washington, and the University of Waterloo. And among bootcamps, those that extend over more than six months and that include an internship, such as the Ada Developers Academy, have a far better track record than those that do not. 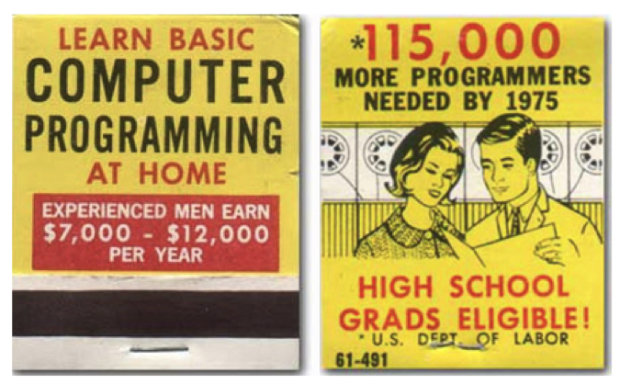 Marijuana is making a comeback in Washington, and with it, books of matches. Keep an eye out for the 21st century version of the advertisement to the right – with women included, and an additional zero on the salary.

Ed Lazowska is the Bill & Melinda Gates Chair in Computer Science & Engineering at the University of Washington – one of the nation’s foremost computer science programs, and a top supplier of new college graduates to leading-edge tech companies of all shapes and sizes.