Starbucks seems to be on every corner sometimes, but what about every doorstep or desk? The coffee giant, which popularized the notion of a “third place” apart from home or work, is launching a new experiment that expands its reach directly to those first two places in a new way.

Starting today, just in Seattle and only on iOS for now, the company is rolling out a pilot of “Starbucks Delivery by Postmates.” The service lets customers use the Starbucks mobile app to order food and drink for delivery within an hour, but the company says most orders will arrive in 30 minutes or less.

In a test of the service conducted for GeekWire yesterday, a large order of coffee and food was delivered to a downtown Seattle office building in just 17 minutes. And yes, the coffee was still piping hot (or ice cold, depending on your preference), thanks to a special thermal delivery bag and some sophisticated behind-the-scenes logistics developed by Starbucks and the Postmates delivery service. 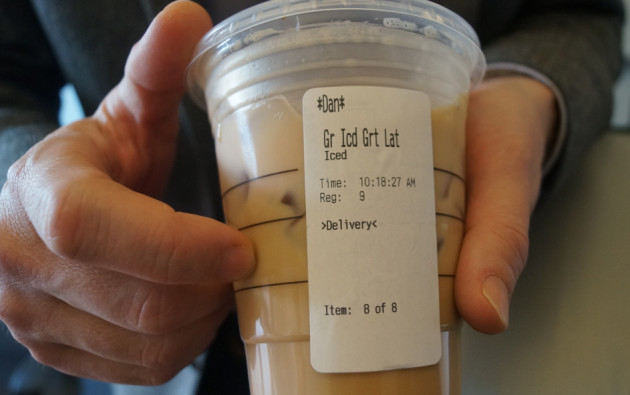 With a delivery fee of $5.99, this will not be an economical way of getting a single cup of coffee every morning. The new delivery service is targeted more to larger orders, allowing for delivery of up to 8 food and drink items at a time.

Think of it this way: Starbucks is about to make life much easier for a lot of interns.

The delivery service, available between 6 a.m. and 7 p.m., is an extension of the Mobile Order & Pay feature that already lets Starbucks customers place and pay for their order before they arrive at the coffee shop. It uses the same behind-the-scenes technology infrastructure and the process is much the same for the baristas who make the order. But under Starbucks’ partnership with Postmates, a courier will instead pick up the customer’s order. 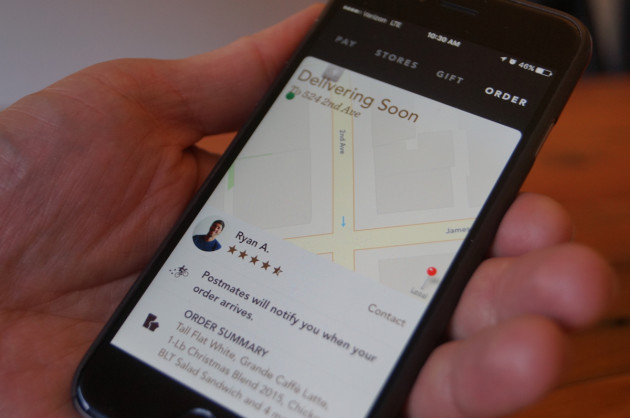 As with many delivery services, Starbucks and Postmates will let customers track the progress of their order on a map. But behind the scenes, they’re also using location technology to make sure that the coffee is hot and the food fresh — automatically sending the order to the Starbucks closest to the customer’s location, and waiting to print the ticket that starts the order in the store until the Postmates courier is within a certain range of that Starbucks location.

“The degree of difficulty here is not trivial,” said Dan Beranek, Starbucks director of digital ordering, after demonstrating the delivery service on Tuesday with an eight-item order that included a Grande Iced Green Tea Latte, a one-pound bag of Christmas Blend 2015 coffee, a Mini Snowman Doughnut, and a Grande Latte with three pumps of sugar-free vanilla syrup.

“Mobile Order & Pay and delivery are really breaking the mold for the third place experience,” Beranek said. “We don’t think it breaks the third place experience, we think it expands and enhances it, and gives customers what they expect and want from Starbucks in a new way. But it’s been a challenge to roll that out, so we’re happy to have a partner like Postmates to do that with.”

The pilot is launching today in downtown Seattle and the nearby neighborhoods of South Lake Union, Capitol Hill, Madison Park and the SODO area.

However, Starbucks isn’t providing a specific timeline for any future rollout of Starbucks Delivery by Postmates beyond the initial pilot in Seattle. The idea is to test and learn here before expanding.

Starbucks has separately been offering “Green Apron Delivery” at the Empire State Building in New York since October, but that service is dedicated to a single office building and works through a different process, not involving the mobile app.

Postmates also offers delivery of Starbucks coffee and food through its own app, but the new integration with the Starbucks app offers the flat $5.99 delivery fee, as opposed to a variable fee, and lets Starbucks customers collect My Starbucks Rewards stars, offers and other perks. Customers don’t need a Postmates account for delivery through the Starbucks app.

“We put a lot of care, time and effort into making this a very seamless experience inside the Starbucks app,” said Holger Luedorf, Postmates vice president of business. “It’s the very first time, to my knowledge, that an international food and beverage company like Starbucks is offering such an instant-gratification, on-demand delivery service — especially of a product that has such a short shelf-life.”

Luedorf added, “We think we’re going to be able to do this at a very high quality, and I don’t think that’s ever been done before.”

To order Starbucks for delivery in the initial Seattle test area, update to the latest version of the Starbucks iOS app, then choose “Order,” select “Delivery,” and then go through the process of building an order to have it delivered to your address.