The 20-year mark for most class reunions is usually a biggie for most people — and this year, the site that is known for connecting classmates and helping plan reunions turns 20 itself.

Launched in 1995 by former Boeing manager Randy Conrads, the Seattle-based social networking company was one of the first out there, started when Facebook co-founder Mark Zuckerberg was just 11 years old. Today, Classmates reports that it has 70 million members from over 90 percent of U.S. high schools.

While that sounds impressive, Classmates had an opportunity to parlay its initial success in social networking to become the Facebook of today, a chance also missed by the likes of MySpace and Friendster. Just to put that missed opportunity in perspective, at the end of September, Facebook claimed a whopping 1.55 billion monthly active users. Its market value is $304 billion.

Back in the day, Classmates was a site to keep tabs on your schoolmates, and it was one of the first to find connection points between old pals. Today, it offers other fun stuff like allowing users to browse yearbooks, dating back to 1885, and digging up celebrities’ high school photos.

In this Classmates’ blog post, the company offers a brief retrospective of the evolution of social media, starting at its launch point when most people didn’t even have a cell phone.

This little walk through memory lane highlights such events such as Y2K and the surrounding hysteria, the creation of MySpace (if you’re worried about Tom, don’t be — he cashed out at exactly the right time and is now traveling the world), and when Facebook was just for college kids.

Classmates’ history hasn’t been without its own bumps. In May, the company agreed to pay $11 million for “deceptive billing and marketing practices,” in an investigation over its partnerships with third parties that automatically charged customers for services like discount buying clubs and travel rewards programs.

In 2011, the company also agreed to a $2.5 million settlement for users who received emails from “phantom friends,” which then tried to convince them to sign up for the paid service.

Last August, Classmates was acquired by Bellevue-based Intelius for $30 million. That was a steep discount from the $100 million that United Online paid for the social network in 2004.

We asked Classmates’ CEO Abani Heller, who’s been with the company since 2004 and risen through the ranks to his current role, a few questions about the evolution of the company. Here’s what he had to say:

GeekWire: Twenty years, that’s like a century in Internet world. Why do you think Classmates.com is still around?

Abani Heller: I think largely because we serve a certain demographic and have a value proposition that is still not found elsewhere and that is fairly evergreen – the concept of reconnecting with high school friends.

Everyone is graduating from high school still, and when you hit about that 25-year reunion mark, you notice that everyone starts thinking about reunions and you get emotional. Of course, you have Facebook friends from high school, but Classmates is much more about the exploration of the old class and the old yearbooks we have. Then you find a few old interesting connections and find out what happened to them.

We’ve stayed true to that, and it’s been key to our survival and still being here and being relevant in today’s media market. We serve a need that no one is prepared to serve or in a position to serve.

GeekWire: The site has about 70 million users? Can you tell us how many more are still joining and give us a picture of who they are?

Heller: Thousands of new members are joining every day. It’s a free membership and to put yourself in the directory of where you went to high school. As a media company, we have 70 million registered accounts, representing over 200,000 high schools across the country.

One of my favorite former CEOs, long before Facebook existed, literally took a plan to (the) board of directors, and in essence, had Facebook-like plan in blueprint. The board was very focused on our value proposition and passed.

As far as our demographic, think about where the high schools are big: New York, Florida, Texas, California, places with big geographies and large classes. That’s who registers and connects with long-lost pals.

And we see older. In 2015, we’re still looking at a population of people who are going to get interested in our value proposition when they turn about 42 or 43, or even into their 60s. That’s our core demographic.

GeekWire: What do you think Facebook did that Classmates missed?

Heller: I think they have totally nailed sharing with my current friends what I had for lunch today.

They’ve become the phonebook for the Internet age

Funny story: I’ve been with Classmates for over 10 years, and I’ve worked with many CEOs, CTOs, COOs, and one of my favorite former CEOs, long before Facebook existed, literally took a plan to (the) board of directors, and in essence, had Facebook-like plan in blueprint. The board was very focused on our value proposition and passed.

Facebook for us is more about current connections. Of course, it also includes reconnection, but it’s much more about connection. That is something they have done that I’ve seen no one else do. They’ve become the phonebook for the Internet age.

I love that I’ve reconnected with friends around the world and can watch their children grow up and them go on vacation. And that’s all around the moment…Facebook is all about sharing info that’s going on in the moment.

GeekWire: What are some of the top uses for the site now?

Heller: The most exciting thing in the last five years we’ve leveraged is that yearbook asset. We literally have more than 300,000 digitized yearbooks on the site, each one hundreds of pages. We’re on the tip of the iceberg as to what we can do with that yearbook asset.

The core reason is that human beings in American are nostalgic when it comes to reunion season, and they are 20 or 30 years removed from that experience. There is no better way to relive that experience than to go back through their yearbook.

See the Classmates infographic on the past 20 years below: 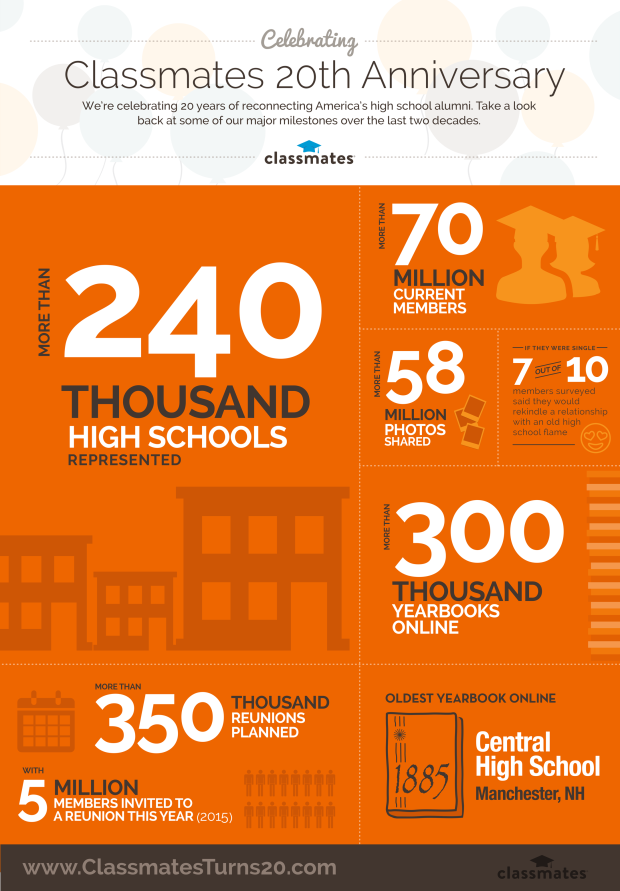