Bill Gates wants to develop a better way to produce nuclear energy, and now a Chinese company is helping him do so.

The Microsoft co-founder spoke for a few minutes at an event on Tuesday in Seattle about TerraPower, a Bellevue-based company founded eight years ago that is developing a traveling wave reactor which would improve upon nuclear technologies created in the 1950s. Gates is chairman of the company, which employs 120 and originally spun out of Nathan Myhrvold’s Intellectual Ventures lab.

The two companies plan to work together to complete the traveling wave reactor design and commercialize the technology. The collaboration will help accelerate technology development overall.

“We recognized from the beginning that we needed a key partnership to take this design and make it a reality,” Gates said today. “We are very excited that CNNC has been talking with us and working with us about a very important partnership. The MOU we signed today was a milestone with our relationship with them.”

TerraPower is developing technology that is not only more energy-efficient than what’s available today, but offers a number of other advantages.

Gates said that TerraPower’s “next generation nuclear plant” is six times more fuel efficient and generates less than 20 percent as much waste than existing options. It can also be a “dramatic step forward in terms of safety,” said Gates, noting that the technology can avoid problems of nuclear material for weapons proliferation.

“By being a form of clean energy, it can make a huge contribution to the global goal of having low-cost, clean energy,” Gates added. 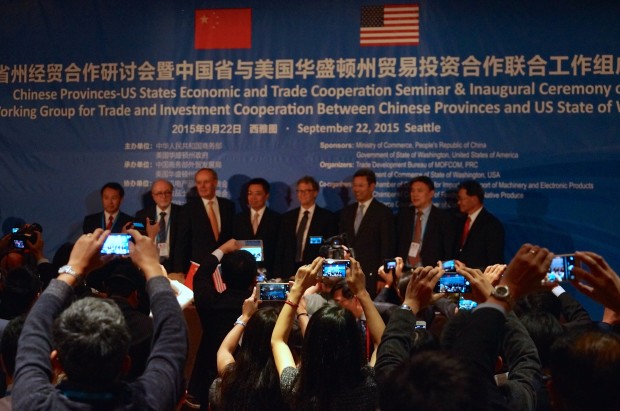 However, Gates did note that TerraPower faces a “big technical challenge.” He said partnerships with CNNC are necessary to make the company’s “breakthrough” vision a reality.

“This is something that I think exemplifies the U.S. and China working together well and relying on the strengths of both countries,” Gates said.

Tuesday’s event is among an number of gatherings between U.S. and China business executives and government staff as President Xi spends three days in Seattle before heading to Washington D.C. to meet with President Obama.

Editor’s note: Details of the MOU were added to this story. The story was also changed to reflect the fact that Gates is not having dinner with President Xi in Seattle.