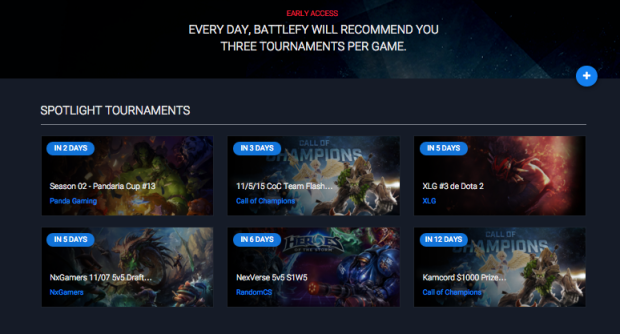 Battlefy Discovery launched today, giving players personalized recommendations for daily tournaments. Discovery takes into account skill level and favorite games, comparing them against the tens of thousands of tournaments organized on Battlefy. Each day, players get up to three recommendations of upcoming tournaments for games like League of Legends, Dota2, Hearthstone, Heroes of the Storm and Call of Duty.

“With the number of eSports tournaments growing exponentially, it has become more difficult to find quality tournaments that fit your schedule,” said Battlefy founder and CEO Jason Xu. “Battlefy works with super talented tournament organizers who have created phenomenal experiences for eSports fans. We’re incredibly excited to be able to share their events with players around the world through Battlefy Discovery.”

The 17-person company has currently raised $3.5 million to build out its eSports tournament service.