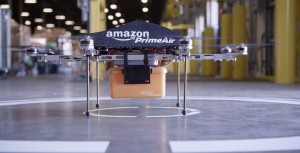 Amazon’s drone delivery is still a little ways off at least, but we got another glimpse at the future today thanks to a patent application the company filed. The “Unmanned Aerial Vehicle Delivery System” patent describes a system that would allow Amazon’s drones to intelligently reroute to find a package’s recipient through their smartphone.

That’s just one of the new details included in the patent, which was first reported on by the BBC. It’s part of an overall system that will allow Amazon’s drones to intelligently reroute themselves with the package in order to reach the user wherever they may happen to be, which would be an important benefit for the system over a traditional driver-based delivery.

Right now, current delivery systems still require that users provide a physical address, and it’s often difficult, if not impossible, to change that on the fly once a package is on its last legs. Amazon Prime Air could be set up in such a way that users get their package no matter where they are, even if that happens to be in the middle of a wheat field.

In addition, the patent also reveals that Amazon could use drones of different sizes and shapes to accommodate different packages. That way, if someone’s ordering a stick of deodorant, the company doesn’t need to dispatch a drone big enough to lift a hefty volume like “Capital in the Twenty-First Century.”

Of course, there’s still the matter of regulatory approval. The Federal Aviation Administration has been slow in creating guidelines for commercial delivery, and it’s not clear if the legal framework around drone usage will allow for Amazon’s delivery plans in the U.S. That hasn’t stopped the company from continuing to test and develop its drones in Canada and the U.K., though.