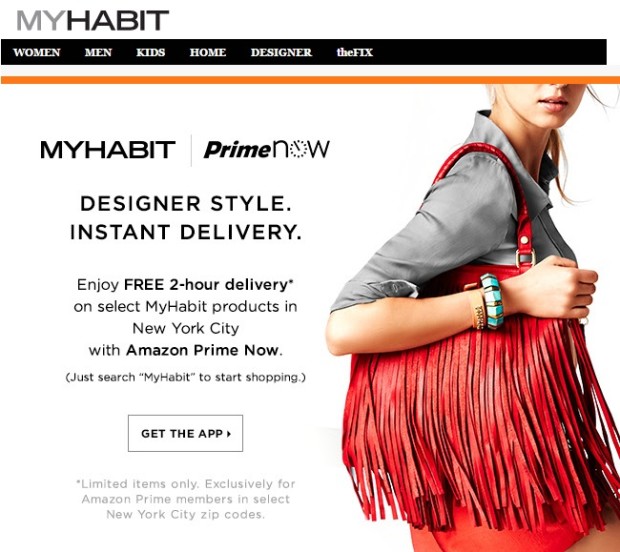 Amazon is redefining the meaning of flash sales.

In emails sent to customers yesterday, Amazon told its MyHabit.com customers that some orders may be delivered to their doorstep within two hours for free.

For now, the offer only applies to residents of New York on qualifying items, but it represents a huge shift from how the company is currently doing business.

To pull it off, Amazon is leveraging its Prime Now service, which delivers items to Prime members within certain zip codes in two hours for free.

Currently, MyHabit orders under $99 can take up to four to six days to arrive and cost $3.99, if you are an Amazon Prime member or not. If you want something to arrive the next day, it will cost an astonishing $20.

Offering fast shipping times in the flash sales industry is unheard of because of the logistics involved. Generally, items are only available for a limited time (gone in a flash!), so sometimes items are not stored in the retailer’s warehouse, but instead have to be shipped from the manufacturer. In those situations, the wait can be longer.

MyHabit, which is focused on selling designer brands for women, men, kids, competes with a host of other providers, including Gilt Groupe, Zulily and Groupon’s ideel.

It’s unclear if this program is something that Amazon could ever replicate in other cities, or if it’s best suited for New York City because that is where MyHabit is headquartered.

In contrast, Zulily, which recently sold to QVC, has had a hard time meeting customer expectations when it comes to shipping times. In response, it has started to experiment with storing merchandise in its own warehouses to speed up the process, but it is far from every accomplishing a two-hour delivery window.

To see which items on MyHabit qualify for speedy delivery, customers must download the Amazon Prime Now app and search for “MyHabit.” When I did that in New York, I received only 24 results, which were mostly for handbags and other fashion accessories. Clearly, Amazon has a long way to go for customers to see Prime Now as a viable alternative to shopping on MyHabit directly.