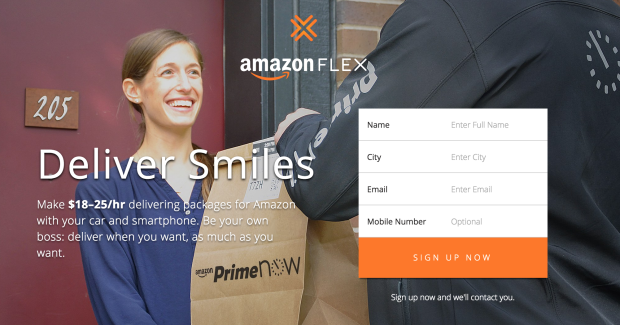 Amazon says its experiment with an Uber-style delivery network called Flex has gone so well in Seattle over the past few months that it’s planning to expand the offering to more cities. And it looks like the e-commerce giant won’t be stopping there.

Amazon isn’t getting into details on how big its Amazon Flex program will become, and it isn’t revealing which cities will be next, but new job postings discovered by GeekWire signal big ambitions for the program. In short, the company thinks the Flex service could fundamentally change the way customers receive their orders all around the globe.

Flex is built to be part of the “sharing economy,” where drivers who want to make some extra money can spend their free time delivering packages for Amazon. They use their own vehicles and a mobile app to schedule deliveries. The independent contractors pick up packages at Amazon warehouses and bring them to customers’ front doors.

Right now, Amazon is just crowdsourcing couriers for its Prime Now one- and two-hour delivery services. But several job postings say the company plans to also eventually use the platform to let everyday people make extra cash by delivering regular Amazon parcels, too.

The jobs Amazon is filling including software engineers, mapping experts and logistics pros. The descriptions say the service is changing “the way Amazon moves and delivers packages,” and note that being part of this team is a “chance to make history.”

One description went so far as to say the company is building a platform for “millions of crowdsourced Delivery Partners,” but an Amazon spokeswoman said that one may have gone a little too far. Amazon plans to edit that job description. 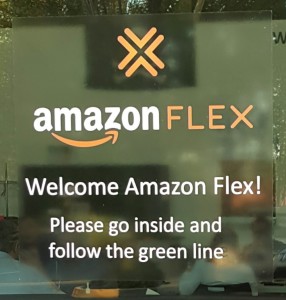 To be fair, companies do like to overhype projects when they’re trying to recruit potential new employees. But with at least 62 open positions and four new Amazon Flex development teams spread across Seattle, Austin, Phoenix and Toronto, it seems safe to say that Amazon has pretty significant plans for the service.

The company advertises that Flex drivers can make $18 to $25 per hour, but an Amazon spokeswoman said the average driver so far has actually been earning more than that.

Workers set their own schedule and make as many deliveries as they choose, seven days a week. They just need to be at least 21 years old and have a car, driver’s license and a clean background check.

Here’s how Amazon describes the service in several job postings:

“We recently announced Amazon Flex, a crowdsourced delivery platform that enables individuals to be their own boss while earning up to $25 or more delivering ultra-fast Prime Now orders today, and parcels in the future. Armed with nothing more than the Amazon Flex mobile app, and using their car, an individual can go from sitting on their couch to making up to $25 or more delivering for Amazon. Hours are flexible and can be scheduled in advance or selected on demand. Delivery partners can work as much or as little as they want and delivery opportunities available throughout the day, seven days a week. To ensure quality and safety for our end-customers, all delivery partners will undergo a thorough background checks, including criminal and motor vehicle record checks, and thorough training delivered via the Amazon Flex mobile application.”

Plans for the Flex service were first reported by GeekWire in August, in advance of the company’s official announcement.

Amazon’s Flex service is not impacted by Seattle’s move to make it possible for Uber and Lyft drivers to unionize, as reported this week by the Wall Street Journal. That ordinance impacts drivers shuttling human passengers, not packages.