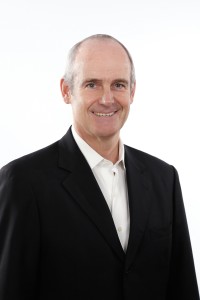 With this appointment, the 58-year-old will essentially become the international face of Alibaba as it tries to expand beyond the Chinese borders. The company said today he will focus on working with key brands and retailers in Europe and U.S. that want to connect with the company’s massive customer base.

Evans, who left Goldman Sachs in 2013 after 20 years as a partner, was once considered next in line to become CEO of the bank. In his final years at the company, he headed up a high-profile internal business standards committee that was established in 2012 as part of a push by the bank to be more transparent after the financial crisis.

His strong background in business standards may come in handy as Alibaba constantly battles concerns about counterfeit goods being sold on its marketplaces.

Evans currently lives in New York and will be based out of the San Francisco office initially, but will be spending a lot of time in China, a spokeswoman said. He reports to Alibaba Group CEO Daniel Zhang, who replaced Alibaba’s Founder Jack Ma as CEO earlier this summer.

Evans also serves as a member of Alibaba’s board, having served as an independent director since the company’s blockbuster IPO in September.

“Michael has been a close advisor to Alibaba Group for many years, and we greatly value his deep knowledge of our business, his experience as a proven business builder and leader globally, and his more than 20 years of experience in China,” said Alibaba’s Zhang. “We have been laying the foundation for many years and now we need a global team in place with best-in-class talent to bring our vision to fruition. To that end, I can think of no one better than Michael to help Alibaba become a truly global company.”

Alibaba has been clear about its international strategy. Rather than compete head-to-head with Amazon.com on its own turf, it has said multiple times recently that it plans to courting U.S. retailers and brands by offering them a way to sell merchandise in China. That approach is fairly different than what people assumed after Alibaba raised $25 billion in one of the biggest public offerings in the U.S.

In a statement, Evans said he is “honored to be joining Alibaba and excited by the opportunity to lead Alibaba’s international growth strategy. I look forward to joining Daniel’s management team and working with a terrific group of people with whom I’ve developed strong relationships.”

The international role will be familiar to Evan, who for many years was based in Hong Kong, where he led Goldman Sach’s push into Asia. He also ran the banks emerging markets business. Evans competed in the 1984 Olympics with his twin brother, Mark. They rowed on the Canadian men’s eights team that won the gold medel. Mark was also a partner at Goldman, but left shortly after the company’s IPO in 1999.