The disparity is as dramatic as any you’re likely to see in a public opinion survey.  Nine out of 10 Americans say it’s important to control the information collected about them and who can see it, but fewer than 1 in 10 Americans are confident that either the government or corporations can provide that control.  And in fact, consumers seem to feel there isn’t much they can do for themselves, either: 91 percent had not made any changes to their internet or cell phone use to avoid having their activities tracked or noticed.

“In the almost two years that have passed since the initial Snowden revelations, the public has been awash in news stories detailing security breaches at major retailers, health insurance companies and financial institutions. These events and the doubts they have inspired have contributed to a cloud of personal ‘data insecurity’ that now looms over many Americans’ daily decisions and activities,” said Mary Madden, a senior researcher at Pew Research Center. “Many find these developments deeply troubling and want limits put in place, while some do not feel these issues affect them personally.” 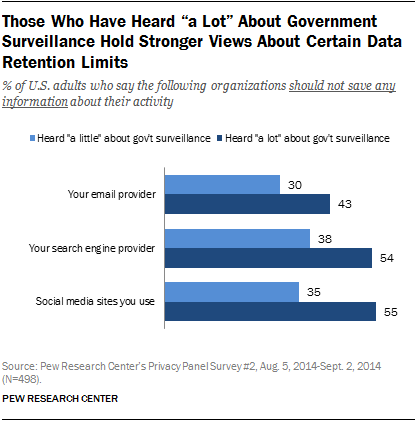 Other findings from the study: