If you were asked to come up with an idea for a month-long project to expand and solidify your skills in your chosen field, what would you pick?

This is not a terribly easy question, particularly when you’ve been in your chosen field for less than 6 months. And yet, that was our task as students at Ada Developers Academy (ADA): To generate and complete a “capstone” project that we would then present to our peers, teachers, ADA alum, loved ones, and (gulp) our soon-to-be employers.

ADA is a year-long, tuition-free program that teaches women to code. It’s stated aims are to increase the pool of developers in the Seattle area and contribute to closing the gender gap in tech. The year consists of seven months of classroom instruction and a five-month internship at a Seattle-area tech company.

The capstone process was intimidating. We spent a week chewing on project ideas, then four weeks executing our projects. We were simultaneously interviewing for and being placed with our internship sites. As you might imagine, it was a bit of a distraction, and great practice for moving projects forward in the face of competing demands.

I had a few project ideas over the course of my time at ADA, but there was one I kept coming back to, mostly because I really wanted it to exist so I could use it. I decided to build an app for bike touring in the Netherlands and Belgium. Explaining why requires a quick diversion on bike touring:

Biking in the Netherlands and Belgium is amazing because of an abundance of bike paths that, once you get going, are relatively easy to navigate. A numbering system simplifies navigation: Each intersection of bike paths (referred to as a “node”) is numbered, and signs mark these nodes, telling you which node you are currently at, and which numbers are next in each direction of the intersection. This means that you can roll around the countryside with just a list of numbers to guide you. It’s fantastic!

Here’s the problem: These nodes don’t consistently appear on most online map applications. So, when I wasn’t on a bike path (e.g., when at the airport, a train station, hotel, exploring a city), it was surprisingly hard to find my planned path in the first place. I spent a lot of time wandering around, looking at paper maps, just trying to find the first node on my planned route. And it isn’t just me. 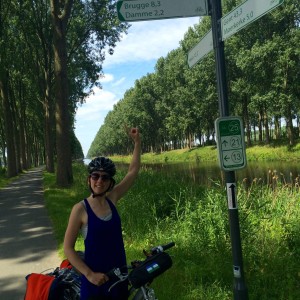 My project solves this problem. It’s a map-based, mobile-optimized web application called bspoked that helps bike touring enthusiasts avoid getting lost in the Netherlands and Belgium. The mapping interface allows you to find your location or enter a location, view the bike nodes around that location, and navigate to any of these nodes.

I worked in a familiar stack, Ruby on Rails with Javascript on the frontend, and chose mapping as the big new thing I’d be learning during my project. For mapping, I used data from OpenStreetMaps, the OpenCycleMaps base layer, and Mapbox and Leaflet for additional layers. I used a PostgreSQL database and deployed through AWS EC2.

We presented our capstone projects over the course of four hours on the Friday evening before Halloween. (Earlier in the day, our teachers donned dinosaur costumes!) As I sat in that room watching each of my cohort-mates present her project, I was riveted and amazed at how far we’ve come in just six months.

The result was impressive. Some other examples:

Three of my classmates opted for hardware projects:

As you browse this (incomplete) list, please keep in mind that our capstones were all fully deployed projects and that, six short months prior, none of us knew how to program. Our presentations were full of words that we couldn’t define six months ago.

There are additional features I’d like add to my project (e.g., an “about” page explaining what it does and why, more bike route planning/navigation tools), and the code could use refactoring, but I’m proud of what I accomplished.

On November 30, we started our internships at tech companies in the Seattle area. I’m extremely excited to be interning at EnergySavvy (working alongside three ADA alumnae). When I get nervous about this new challenge, I remind myself that there are 23 women in the same boat cheering me on. It helps.

GeekWire asked me to periodically write about my experiences at ADA. I’m eager to hear from others interested in ADA, programming, and increasing diversity in tech.