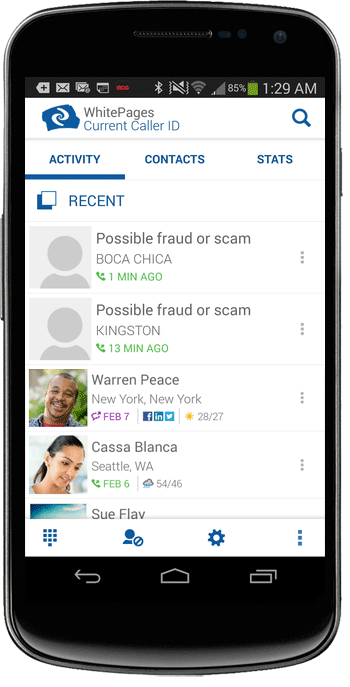 Random calls from telemarketers and automated machines are already annoying enough. But when those phony calls end up costing you money, it can actually be a serious problem.

Whether you’ve already been tricked by the “One Ring” phone scam or are hoping to steer clear of similar spam calls, the WhitePages Current Caller ID app might be a good option.

WhitePages today announced that its caller ID Android app has been updated with more than 20,000 scam numbers tied to the One Ring problem and other similar bogus frauds.

The One Ring scam tricks people into returning unknown missed calls from numbers that look like U.S. area codes, but are actually international phone numbers from auto-dialing computer programs. If you call the number back, you’ll be “put on hold” — and incur big per-minute charges while you wait.

The WhitePages app, which is essentially a beefed up caller ID that shows social media updates and other pertinent info for incoming calls, will now alert users if an incoming call comes from one of the flagged numbers. It will provide a similar warning if you call a suspicious number that may result in high charges. Users of the app can also leave comments about spam activity for a specific number, which helps WhitePages determine a phone number’s overall spam score.

There are other apps out there that also block unwanted calls, from the NUMBERCOP to Call Control to Mr. Number.

WhitePages, based in Seattle, moved into new offices in downtown Seattle late last year, just after the company bought out its venture capital investors and paid $80 million to buy back shares from Technology Crossover Ventures and Providence Equity. It has more than 50 million unique monthly users with a database of more than 200 million people and businesses.