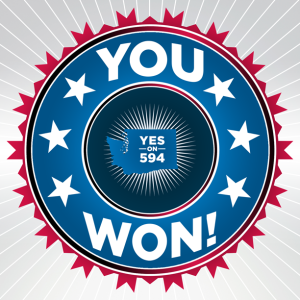 A Washington initiative to increase background checks for gun purchases that was supported by the likes of Bill Gates, Steve Ballmer, and Paul Allen passed on Tuesday evening.

Initiative 594, which requires background checks for Washington residents who buy firearms at gun shows and online, garnered 60 percent of the votes.

I-594 will close what the Washington Alliance for Gun Responsibility calls a “loophole.”

“Law enforcement agencies and public safety officials agree that this loophole promotes illegal gun trafficking and enables individuals with criminal intent to purchase firearms,” the alliance notes. “This initiative will simply ensure that a background check is conducted for every gun purchase.”

I-594 would include some exemptions, including gifts within a family, antique firearms, and temporary transfers to prevent death or injury.

An opposing gun-related measure, Initiative-591, did not pass. I-591 would have prevented Washington from enacting background check requirements that are not required by federal law.