Infant jaundice is a fairly common condition that turns a baby’s skin and eyes yellow. But for parents, it can be difficult to tell when the jaundice is serious enough for medical attention — how yellow is too yellow?

That’s why researchers from the University of Washington are developing BiliCam, a smartphone app that parents can use to determine how severe their infant’s jaundice really is, as extreme cases can cause brain damage.

At hospitals, jaundice levels are typically measured by clinical tests that require blood samples taken from the heel of a baby. BiliCam’s method is much different, instead using a combination of machine learning, a smartphone camera and a color calibration card. 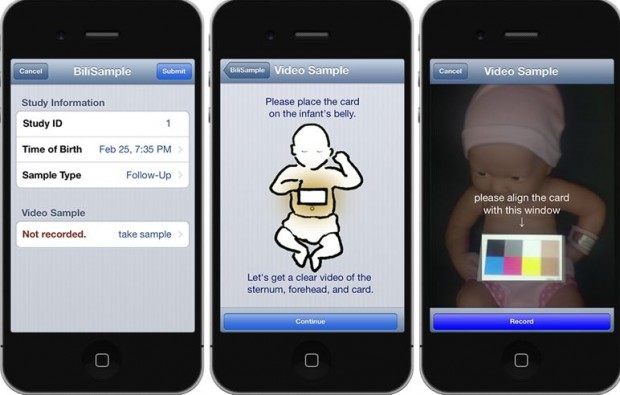 To test bilirubin levels, a parent puts the card on a baby’s belly and snaps a photo of the infant with their smartphone. The photo is then sent to the cloud, analyzed based on a series of algorithms, and within seconds a parent can know the baby’s bilirubin levels.

The app is meant to be a screening tool rather than a “definitive diagnostic,” but one that certainly still has value.

“BiliCam will make screening for and monitoring jaundice much easier, faster, and noninvasive, saving trips to the clinic, preventing many unnecessary blood tests, and reducing stress on the whole family,” wrote the developers and scientists who worked on BiliCam.

While the app has been tested on 100 newborns in Seattle, it is still not ready for mainstream use. The UW researchers just launched a crowdfunding campaign to help raise $25,000 that will fund further clinical studies. The BiliCam team, which includes Jim Taylor, Jim Stout, Shwetak Patel, Eric Larson, Lilian de Greef, and Mayank Goel, also want to provide the app in developing countries where jaundice is often under-diagnosed.

Learn more about Bilicam with this academic paper, or with the video below:

Update, Nov. 2 — The Washington Research Foundation announced that it will match all contributions to the crowdfunding campaign up to $50,000.