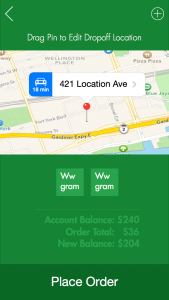 University of Washington students Megh Vakharia and Josiah Tullis are the co-founders behind Canary, a service that moves marijuana from the dispensary to your door.

Vakharia and Tullis, who will be pitching at tonight’s TechCrunch Meetup in Seattle, haven’t quite launched their new startup yet. They are taking time to ensure that Canary operates legally in what is still a nascent industry.

To avoid any legal issues and to operate within the confines of the law, the company is purely a middleman. As a marketplace app, it acts as an intermediary between dispensaries and customers.

Here’s how it works. Those ordering marijuana can deposit money into a Canary account at any of the company’s partnered dispensaries. From there, they can browse through the Canary app, pick their favorite strains — detailed information from Leafly helps describe different effects — and set a pickup location.

Canary then sends a courier to pick up the marijuana and bring it to the customer, who is verified through the Canary app. The company charges an extra 10 to 25 percent off the base price for delivery, and gives a cut to the courier.

“Because the exchange of money (the point of sale) happens at the brick-and-mortar dispensary, Canary complies with the current I-502 rules and regulations,” explained Tullis, a sophomore studying design.

Canary plans to launch its service at the end of July for medical marijuana dispensary partners, but there is potential for even more business. That’s because Washington is set to open recreational marijuana retail stores in July, and anyone above 21 years of age will be able to purchase pot.

There is competition in this space. Delivery services like Nurse Nancy and Winterlife Co-op already offer convenient ways for people to have marijuana delivered.

But it seems there is room for more, particularly as recreational pot becomes legal in Washington and Colorado. Tullis said that the company has begun hiring couriers and received “an overwhelming amount of interest there.” Medical patients that the co-founders interviewed are also eager for a service like Canary.

Much like how Uber has built efficient software to win over users, Canary hopes to do the same for marijuana delivery. The company also plans to make revenue off the data it crunches from app users, as well as in-app promotional spots sold to dispensaries (and potentially recreational shops).

For now, Tullis and Vakharia — who met through the UW’s Lavin Entrepreneurship Program — are focusing on the medical marijuana market since the laws around delivering recreational pot are less clear. Eventually they’d like to expand this service to Colorado, where recreational marijuana shops have been legal since January.