New Years Eve 2014 could end up being Uber’s busiest day yet.

The on-demand transportation company this morning held a conference call for reporters ahead of Wednesday, when it expects to provide 2 million rides worldwide on its platform.

Uber today went over the details of its surge pricing technique, which will surely be in effect on Wednesday with thousands and thousands of potentially intoxicated customers requesting a ride to and from their New Years Eve party destinations.

Uber’s surge pricing jacks up the cost of a ride to help encourage more drivers to work when demand is exceeding supply. The idea is to give customers a prompt driver at all times, no matter how many passengers are requesting a ride.

The technique has angered many critics who say the practice is the equivalent to price gouging. It’s been a controversial topic and most recently came up in Sydney, when Uber was charging customers more than four times the normal rate during the hostage crisis on Monday before deciding to refund customers and offer free rides following backlash on social media. The company had previously agreed to cap its surge prices during emergencies and natural disasters in the U.S.

Uber made it clear today that it informs customers when surge pricing is in effect, and when rates are more than double, it asks users to type in the surge multiplier to confirm that they know how much more they’ll be paying.

Despite this, many people still complained after New Years Eve last year when they read their Uber receipts the next day, with some paying upwards of $400 for a 30-minute ride.

Uber, which is trying to patent the act of surge pricing, has consistently defended the practice with a basic economics argument, noting that it simply helps supply meet high demand. Benchmark Capital partner and Uber investor Bill Gurley offered a detailed analysis in March for why Uber’s model differs from that used by airlines and hotels.

Uber, which is running a New Years Eve charitable promotion with MADD, offered this graph last year to those hoping to avoid paying fares that might empty their wallets: 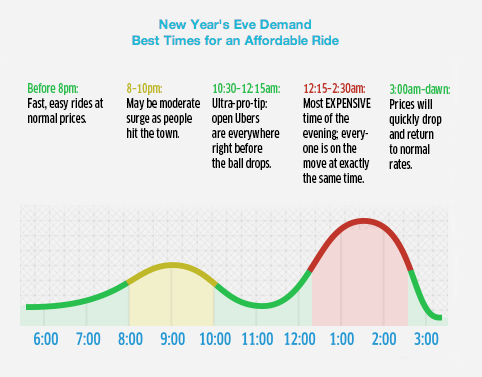 Editor’s note: This story has been corrected to reflect the 2 million rides “worldwide.”