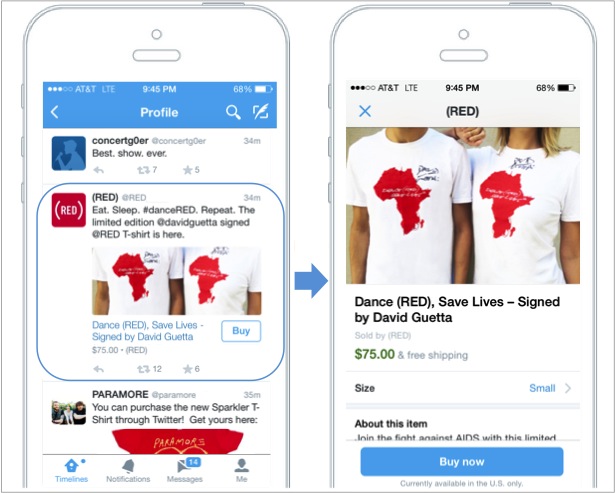 Twitter this morning announced that it is testing a new feature that allows mobile users to buy products directly from their tweet stream.

The new program, which already has brands like Gumroad and artists like Pharrell on board, lets companies embed a “Buy” button in tweets. After pushing “Buy,” users can then simply enter their shipping and billing information while still within the app. Twitter ensures that the payment and shipping data is encrypted.

“Users will get access to offers and merchandise they can’t get anywhere else and can act on them right in the Twitter apps for Android and iOS; sellers will gain a new way to turn the direct relationship they build with their followers into sales,” Twitter notes in a blog post.

Today’s announcement follows reports from the past several months of Twitter’s e-commerce intentions as the company seeks new ways to create more revenue and advertising dollars. The social media giant plans to roll out this payment feature to more users and partners in the coming months, while also adding the functionality to desktop.

At first glance, Twitter’s new payment tool seems like a threat for social payment startups like Portland-based Chirpify. However, the company told GeekWire this morning that it isn’t worried about Twitter’s new “Buy” button. While Chirpify debuted in 2012 as a social commerce platform, the startup has since expanded to a broader marketing conversion platform.

“However, while working with clients like Adidas, AT&T and Oreo we found they had a real interest in leveraging social channels as the ‘point of conversion’ for their marketing on other channels and so we expanded our platform to serve those needs,” Tate added.

It will be interesting to see how Twitter’s payments tool catches on, both with businesses and consumers. Earlier this year, Amazon tried something when it introduced #AmazonCart as a way for customers to add items they see on their Twitter feed to an Amazon online shopping cart.