For the three entrepreneurs building pol.is, the problem was simple: Big groups of people trying to communicate effectively about a certain topic online was largely inefficient.

That’s why they started pol.is, a new Seattle company that has developed a way to combine polling data from hundreds of people with machine learning and interactive data visualization. The end result is a simple, clean way for anyone from college professors to market researchers to efficiently collect and package large amounts of data while enabling users to spur conversation based on all the input.

“Getting large groups of people to communicate effectively is really painful,” said CEO Colin Megill. “We are solving that.”

Megill, who has a social science background, said he’d been thinking about the problem of coordinating group behavior for years. When the Arab Spring and 2007 financial crisis hit, he then wondered how web technology could help fix that problem.

A few years later he met co-founder Mike Bjorkegren, who was previously a software developer at Amazon.

“We wanted it to be really simple, really fast, really parallel, with algorithms doing the work of picking groups it would take people months or years of ground work to do,” Megill explained.

The pair rounded out their founding team with Chris Small, a programs and systems analyst at Fred Hutchinson Cancer Research Center.

“Chris was instrumental early on in helping us find and implement those algorithms.” Megill said. “The three of us together moved from multiple prototypes to reality over the past year and a half.”

We caught up with Megill for this installment of Startup Spotlight, a regular GeekWire feature.

Explain what you do so our parents can understand it: “Getting large groups of people to communicate effectively is really painful. We are solving that.”

Inspiration hit us when: “Combining techniques from machine learning and web-based, interactive data visualization with such a huge problem statement led to really powerful team meetings.”

VC, Angel or Bootstrap: “Bootstrap for now. Our goal is to build a sustainable company on our own.”

Our ‘secret sauce’ is: “We’re a small team of systems thinkers. Everyone on the core team is extremely creative and extremely technical.”

The smartest move we’ve made so far: “I feel very glad we focused on the early customer feedback that led us to the logic behind the pol.is API. This idea of programmatically starting conversations that can scale to thousands of people, and having the conversation ping you like a household appliance when activity wraps up. That means developers can set pol.is up to send a link to a random subset of users when they ship a new product, for instance, and get feedback without any more overhead than the time it takes them to analyze the results.

Any time you can multiply the power of your most taxed people, like developers and data scientists, and empower those who are non-technical to leverage data the company already has for decisions — we’ve found that tying these things together has made for a solid value proposition. For comparison, initially we weren’t thinking that using pol.is programmatically would be the magic bullet. We were much more interested in designing it so that someone on stage could start a conversation in less than ten seconds — which is still the case.” 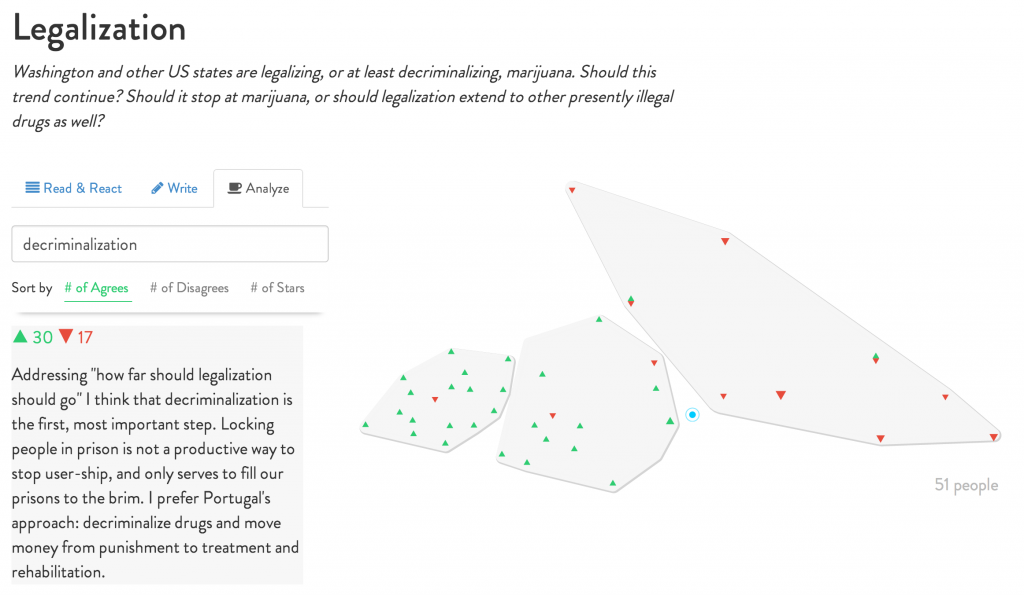 The biggest mistake we’ve made so far: “I don’t know yet. I’m sure it will be apparent when we’re further downstream.”

Would you rather have Gates, Jobs, Zuckerberg or Bezos in your corner? “We talk about Jobs all the time. He was a beacon for innovators and uncompromising about UX. He was a holistic thinker — he deeply understood the human implications of what he was building.”

Our world domination strategy starts when: “We originally conceived of this as tool for political leaders. Our early adopters have been in data science, market research and replacing comment threads. We built it for city scale conversations — millions of people in the same space reacting to each other and finding a ‘place’. Politicians are invariably slower to adopt technology, so we want more mindshare before we go in that direction.” 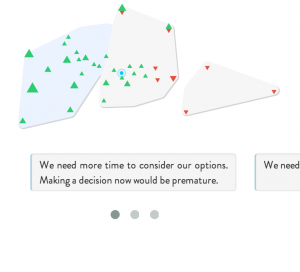 Rivals should fear us because: “When we prototyped pol.is, people loved the feeling of moving closer to their ‘tribe’ inside of the visualization, and there’s psychology at work there. Even though comments that scroll down endlessly under blog posts are universal, everyone also agrees they are pretty bad, and they’ve been bad for a very long time.”

We are truly unique because: “On one hand, I think we may be the first company to combine online machine learning (neural nets, clustering, dimensionality reduction) with interactive data visualization in a real-time web app. The visuals we have are user-facing — they aren’t only for analysts behind the scenes. Plenty of apps are real time, machine learning is all over the place, a handful of niche players use interactive data visualization — but not all three together.”

The biggest hurdle we’ve overcome is: “Smushing a lot of information into a small space, but making it broadly understandable. This was a solid year of work. We read a lot of Tufte and stole a lot from cartography. It was the most time, but also the most interesting part of the work, to build up a symbol language that people wouldn’t find confusing or ambiguous.

Early on we didn’t know at all how we were going to represent things — we have some screenshots of what we call the ‘ball of doom,’ when we were still thinking that we would visualize lines between dots to show connectivity. The mapping for each dimension of meaning you see in the final visualization (color, shape, opacity, position) was hard won over months of working the problem, getting early user feedback, mocking and prototyping.”

What’s the one piece of advice you’d give to other entrepreneurs just starting out: “Find a way to get ‘impolite’ feedback about what you’re doing. Get impartial feedback from people you think are potential customers on the question: ‘Is this worth doing?’ One day during a customer interview, I took six pages of notes and it led to one of our most powerful features. It screamed, ‘this is worth doing,’ to the entire team. This has happened over and over in our communications with customers.”