When it comes to the generational differences between today’s youth and their parents or grandparents, there are the obvious ones: Fashion, music and slang are just a few.

But what’s somewhat unique and specific to teens today is how they define the word “privacy” — and perhaps importantly, what that means for governments currently grappling with how and when to access personal information from citizens that are sharing more data online than ever.

The issue was brought up today to a panel at a University of Washington School of Law event that discussed how government should balance the protection of personal information and national security, among other related topics.

Microsoft Executive Vice President & General Counsel Brad Smith said he believes the definition of privacy has indeed changed. He spoke about the legal implications and cited U.S. Sonia Sotomayor, who noted the differences during the 2012 United States vs. Jones case.

“She referred to the fact that traditionally in the United States, secrecy was considered a pre-requesitive to having a reasonable expectation of privacy,” he explained. “In other words, for many generations, if you said you wanted to keep something private, what you probably were saying is you wanted to keep it a secret. As Justice Sotomayor suggested in that opinion, perhaps that definition of privacy has changed.”

Smith then used the messaging app Snapchat as an example. Led by 23-year-old Evan Spiegel, the app — which Facebook offered to acquire for $3 billion — has become popular largely because photos and videos sent through the system quickly disappear 10 seconds after a user opens the file.

“In effect, I think the new definition of privacy means people don’t want to keep information secret, but they do want to ensure that they control who they share information with,” Smith explained. “They want to control what those people use the information for.”

Smith brought up a keynote Spiegel recently gave, during which he talked about three of the company’s value propositions. When describing one of those propositions, Spiegel never used the word privacy, but Smith contends that “it would read like a privacy manifesto.” 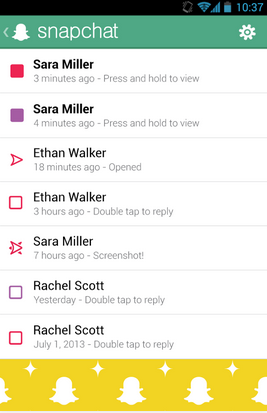 “What this really underscores is that the meaning of words is changing,” Smith said.

William Covington, Director of Technology Law & Public Policy Clinic at the UW Law School, moderated the panel on Tuesday and agreed with Smith. When Covington grew up during the anti-war and Civil Rights Movement, he said that people were always on high alert when any form of information acquisition from the government came about.

He said he doesn’t see that same level of concern from his students today.

“I find them much more accepting of the fact that there is information out there and that information is going to be taken,” Covington said. “I think that there’s a completely different dynamic that’s very much generational.”

The panel, which also included Congresswoman Suzan DelBene and ACLU National Legislative Counsel Gabe Rottman, touched on a number of other topics related to the privacy in the information age. You can listen to the discussion below — the Snapchat talk starts around the 1:02:40 mark.

Related: How Microsoft’s top lawyer would keep the NSA in check