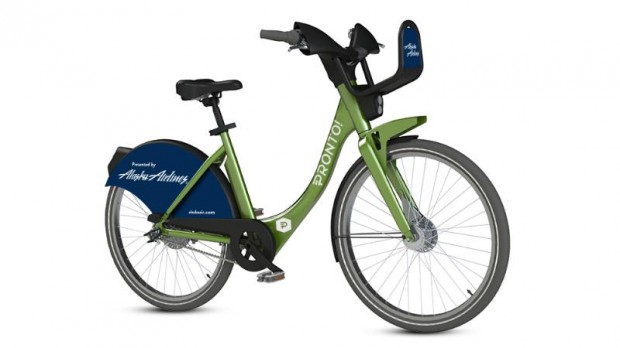 Pronto! Emerald City Cycle Share launches on Monday with an inaugural ride hosted by Seattle Mayor Ed Murray and a press conference at 11 a.m. in Occidental Park. The program, first announced back in May, is essentially a Car2go for bicycles and allows people to rent seven-gear bikes, pedal around, and then drop off the bike at any of the 50 docking stations in town.

The 500 bikes will become available after 12 p.m. today and those in Seattle looking to rent a bicycle for a quick trip can do so by finding the nearest docking station.

Here’s a handy map noting those station locations, which are solar-powered and spread around the University District, South Lake Union, Downtown and Capitol Hill: 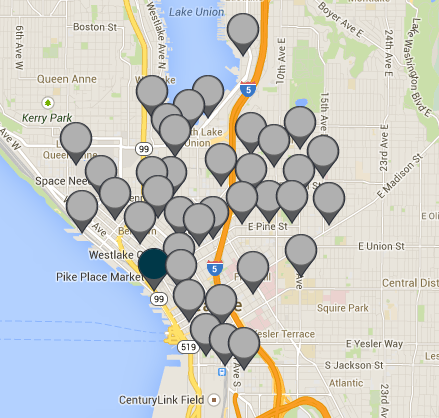 As we noted in August, there was strong initial demand for $85 annual memberships that allow riders to rent blue-and-green bicycles and use them for 30 minutes at a time without any extra charges.

Those that don’t need a year-long membership can buy an $8 24-hour pass or $16 3-day pass. Users, who must be older than 16 and have a credit/debit card, can rent the bikes and then drop them off at any other station. Any ride lasting longer than 30 minutes will incur additional fees. Customers can rent helmets for free.

You’ll also be able to use a smartphone app to find the location and status of nearby bike stations, which allow riders to unlock bikes either with a Pronto key fob or passcode. Here’s how Holly Houser, executive director of Puget Sound Bike Share, explained the technology inside the bikes and stations:

The bicycles are all fitted with a locking mechanism or popsicle just above the front fender that engages the locking function at every docking point. The docking point (cassette) is triggered by a limit switch that reads the RFID tag integrated into the popsicle (to either lock or release the bicycle). This RFID has all the asset information of the physical bicycle, and associates that as a “trip” stating or ending to the member key or code engaged in the transaction. Once in the docking point, the bike can also be locked in place either remotely from the system-back-end or by an end-user by pushing the “wrench” or mechanical button on the physical docking point signaling a need for maintenance.

The idea of Pronto is similar to Car2go, a service that allows people to rent tiny two-door smart cars and park them in a designated street parking area when finished. Back in January, Car2go announced that Seattle was the company’s fastest growing market in the U.S. with more than 40,000 registered drivers and 500 vehicles.

However, the bike-sharing program is a little different. The program is owned by Puget Sound Bike Share, a non-profit, and the program is funded by grants, sponsorships and user fees. Alaska Airlines paid $2.5 million to paint its logo on each bicycle, while Vulcan, REI and Seattle’s Children’s Hospital all put up money for the program.

Car2go, which arrived in Seattle in 2013, also requires drivers to sign up for memberships; Pronto allows non-members to rent bikes on a day-to-day basis.

Portland-based Alta Bicycle Share, which manages similar services in nine other cities worldwide, will operate the program. Seattle is certainly not the first city to implement a bike-sharing program, as more than 200 cities have programs like Pronto already in place.

Pronto plans on expanding to 220 stations and 2,200 bikes, with more Seattle neighborhoods gaining access to the program over time. Read more about the Pronto, including safety and replacement cost information ($1,200 per bike), here.