Taxi drivers and those working for transportation network companies (TNC) will have another week to iron out an agreement that will allow Uber, Lyft and Sidecar to operate legally in Seattle.

Representatives from the San Francisco-based startups, taxi companies and City officials have spent the past month-and-a-half working with a negotiator to establish a new regulatory framework. Mayor Ed Murray had given the stakeholders until today to reach an agreement, and said he would issue a cease-and-desist letter to the TNCs if nothing was in place.

But a City spokesperson told GeekWire today that the groups are “close to a deal,” so Murray has pushed back his deadline by one week.

If an agreement is reached next Monday, you can expect there to be some clarification on TNC insurance requirements, in addition to changes in regulation for the taxi industry in Seattle.

“We need strong insurance requirements, a level of deregulation for the taxi industry that would make them more competitive, and caps that would be acceptable to all parties,” Murray told GeekWire in April.

This entire process started back in March, when the Seattle City Council approved an original ordinance that regulated the new transportation companies, which utilize smartphone apps and everyday drivers to shuttle people around town. Though the ordinance would have legalized the TNCs, the startups weren’t happy with a cap on the number of active drivers (150) each company was allowed to have on the street at once.

In response to those regulations — which also called for 200 taxi licenses to be added by 2015 — a coalition group that received more than $400,000 in donations from UberX and Lyft submitted enough signatures to suspend the ordinance and send the referendum to a public vote.

That put everything back to square one and convinced Murray to hire a negotiator. The mayor wanted to bring all parties together to reach a revised agreement, rather than have the referendum be up for a vote later this year — which is what will happen if no agreement is made. 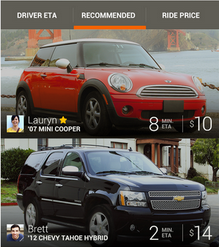 “I worry that with a referendum, a lot of people will spend a lot of money that could be spent better on their own businesses,” Murray said in April. “It will result in folks automatically losing their jobs and livelihood in an East African community — the largest immigrant group in Seattle — that is already deeply struggling financially and with a series of other issues.”

If a compromise is reached by next week, the City Council can repeal the original ordinance it approved and then work together on a new set of regulations. If that happens, the referendum would not appear on a ballot later this year.

However, if no agreement is reached, the referendum would show up either on the August or November ballot for public vote. In this case, Murray will issue a cease-and-desist to stop UberX, Lyft and Sidecar from operating illegally in the city without regulation.

But it sounds like representatives from the taxi industry and the TNCs are close to some type of deal. It will be interesting to see the details of a potential agreement, especially considering what some other lawmakers have set into place recently.

In Colorado, for example, the state just passed legislation that allows the TNCs to operate with certain stipulations for insurance — specifically determining when exactly drivers and passengers are covered — background checks, vehicle inspections, licensing fees and more.

Chicago, meanwhile, just approved laws of its own, which include stronger regulation for TNC drivers that work for more than 20 hours per week and the ability for city officials to cap “surge pricing,” a feature that companies like Uber use to increase prices when demand is high.

We’ll have more on this story later on GeekWire, so check back for that.