Wages in Seattle were up 1.2 percent from the fourth quarter of last year, placing it in a tie for the city with the third greatest wage gain, alongside Baltimore, according to a report by PayScale.

The only two cities ahead of Seattle were Riverside, Calif. and Tampa, Florida. Meanwhile, although the tech industry continues to surge in San Francisco, pay in the City by the Bay dropped 0.3 percent year-over-year. 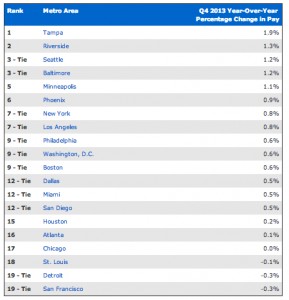 Overall, tech wages have shown some of the biggest growth, rising 1.2 percent over the course of the year, and 0.2 percent last quarter.

While wages continue to rise, PayScale says that consumers can’t do as much with it as they used to. According to the company’s Real Wage Index, which incorporates the Consumer Price Index to track inflation, workers’ wages are still down 7 percent from 2006.

“This means the increases observed in nominal wages are not enough to outpace the increases experienced in the prices of goods and services. In other words, the income for a typical full-time, private industry worker buys them less than it did in 2006,” Katie Bardaro, PayScale’s Lead Economist, said in a press release.