An early and persistent myth of the web is that the Internet levels the playing field for commerce and content. Does the Internet democratize access? Yes. But does it guarantee attention? No.

In a small way, the Seattle Public Library is tackling that attention gap – while at the same time giving budding authors a way to put their words into eBook form and at least get them onto the playing field.

As part of its ongoing Seattle Writes initiative, the library has partnered with self-publishing and distribution platform Smashwords to encourage local writers to package their writing for an audience. The eyeball icing on the finger-typing cake? A contest, open until midnight on October 15, in which up to three entrants who publish via Smashwords will have their eBooks included for circulation in the SPL eBook collection.

The fine print is hardly daunting. Have an SPL library card. Be 18 or older. Publish your eBook (for free) with Smashwords on its website. Enter the contest.

Oh. And write the eBook.

At least it can be any genre (even a short-story collection or poetry) and any length. But it must be original and unpublished.

Librarian Andrea Gough, who is part of SPL’s Millennial Factor Project group, says this is one of a handful of pilots funded through a grant from the Paul G. Allen Family Foundation to reach out to 18-30 year olds. When they were asked, millennials told the library they were interested in literary and creative writing classes. “Since the Library already offers creative writing classes,” Gough explains, “We felt the addition of an eBook publishing platform was an exciting and natural extension.”

Smashwords was selected, Gough says, “because of their expertise – they are one of the only self-publishing platforms that has worked with public libraries.”

“Our collaboration with libraries started with our local library, Los Gatos (CA) Library,” confirms Smashwords founder Mark Coker. After a presentation on eBooks several years ago, despite some predictions that eBooks would lead to the death of libraries, “we realized there was a natural opportunity for libraries to expand their mission, and secure an even more important place in the community by helping to promote a culture of authorship.”

This led to the first partnership. It also turned out that the Los Gatos Library preferred to receive donations of eBooks from local authors instead of physical books, which were “a lot of work for them to accept, catalog and shelve” – as long as the eBook procurement tools were there. So Smashwords built its first co-branded publishing portal for the library, a precursor of the one used by Seattle Public Library.

As a result of the SPL deal, “We get writers who want to publish books,” Coker states.

Yes, Smashwords takes a cut of eBook sales through its distribution network (Coker says authors keep between 45% and 60%, depending on the type of distribution sale, and Smashwords gets 10%). But there’s also a new relationship with OverDrive, which supplies eBooks to public libraries including the SPL. “With OverDrive,” Coker says, “We’re now this much closer to closing the loop. A writer can come to the library, ask how to publish a book, get pointed to our publishing portal, publish a book, and then that book can be purchased by the library.”

And, he adds, “ Our indie authors are pro-library and want to support libraries.” 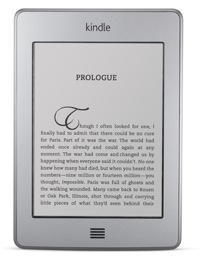 Seattle has a long history of encouraging writers. The Clarion West Writers Workshop, which has been held continuously in Seattle for 30 years, just wrapped up its traditional summer run. Amazon was founded in Seattle and authors are attracted to it like a magnet or a flame, depending on the relationship. And eBooks themselves continue on the upswing (as they continue to coexist with ink embedded into pressed dead trees). The latest Association of American Publishers stats show consumer eBook – what the industry calls “trade publishing” – revenue increased 5.1% in the first quarter of 2014, driven by kids’ and young adult eBooks, while hardcover and paperback sales grew more.

Now to that big lie. For his part, Coker finds the contest to be a great incentive. “Writers want readers. Libraries are engines of book discovery.” SPL’s Gough, while not directly addressing the access-attention gap, says “It represents something else for us: a way to build a unique digital collection of local authors. The Seattle Public Library also offers a slate of creative writing classes, so being able to publish through the Library is bringing it full circle.”

So is this columnist and one-time book author going to get the pithy last word in here? No.