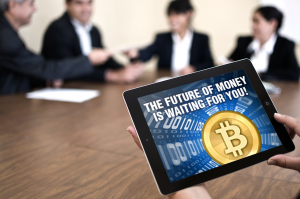 Overstock.com has made a big fuss about accepting the digital currency to the point where you’d expect other major online retailers to follow suit, but Amazon says it won’t be one of them.

In an interview with Re/code’s Jason del Rey, Amazon payments head Tom Taylor said they’ve considered accepting bitcoin, but there’s no rush. “We’re not hearing from customers that it’s right for them and don’t have any plans within Amazon to engage bitcoin,” Taylor said.

If Amazon was interested, and bitcoins suddenly became accepted on one of the largest online stores in the world, the currency would become more usable and liquid. But since Amazon doesn’t have any plans to adopt the popular — yet hackable — currency, it might be a setback until other tools become more commonplace.

Overstock.com, the Salt Lake City-based online retailer, said in March that it took just over two months to sell more than $1 million in products to Bitcoin owners. Further, it said the purchases were made by 4,300 customers of which 60 percent are estimated to be new to the site.

But Amazon, which has been rolling out its own Amazon Coins virtual currency, clearly doesn’t need incentive for new shoppers to discover its services.

At one point, Overstock CEO Patrick Byrne said that Amazon will have no choice but to start accepting Bitcoin — now that Overstock had already started offering it.

“Yes, I actually think that this forces the hand of Amazon and some other big players. They have to follow suit. You will see them follow suit, I’ll be stunned if you don’t, because they can’t just cede that part of the market to us, if we’re the only main, large retail site taking Bitcoin,” he said. “Either they have to start taking it, or they’re just giving away a piece of the market.”

Well, that’s not how Amazon feels.

Instead, Amazon says it sees an even bigger opportunity to provide a better payment system. In a separate Re/Code story, Taylor admitted that Amazon’s chief Jeff Bezos has identified payments as one of the top areas of focus for investment.

He summed up the pressure he feels from Jeff by saying: “Go faster.”